Up to 4,500 jobs to go as new laws limit bets on poker and roulette machines 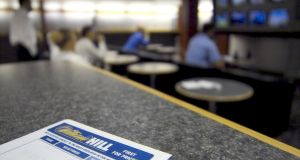 British bookmaker William Hill plans to close 700 shops as it feels the impact of gambling law limiting bets on roulette and poker machines.

The move will lead to about 4,500 job losses, William Hill said in a statement on Thursday. It said the shops are likely to close before the end of the year.

Betting firms are reeling from new limits in the UK on so-called fixed-odds betting terminals, which the government announced in May last year as it sought to curb problem gambling. British lawmakers cut the maximum bet on the devices to £2, down from £100, a change that took effect in April.

The bookmaker, which at one stage had more than 50 betting shops in Ireland withdrew from the local market in 2012 although it still has a handful of stores in Northern Ireland.

The industry has been warning of store closures and job losses as a result. In March, William Hill said up to 900 shops could be at risk of closing. – Bloomberg