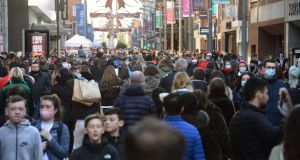 Irish consumers returned to shops in strong numbers for a spending spree in December as soon as the State’s second Level 5 lockdown was lifted, according to data released by the digital payments platform, Revolut.

Revolut, which tracks in detail the spending habits of the more than one million Irish users on its platform, says its customers spent 6 per cent more in December 2020, compared to the same month the previous year.

They also physically returned to retail outlets in large numbers, with two-thirds of transactions taking place in person, and the rest online. This is a reversal of the trend seen during locked-down November, when the majority of transactions took place online.

Prior to the pandemic, in December 2019, three-quarters of December transactions on the Revolut platform were face-to-face.

There was a noticeable spike in spending by Revolut users across almost all retail categories in December, but there was a significant decline year on year in hospitality spending despite the reopening of the sector by the Government for indoor dining under social distancing rules.

Spending in restaurants was down 50 per cent compared to December 2019, while spending in bars fell 47 per cent and in hotels by 46 per cent.

Some retail categories witnessed enormous spikes in spending on the Revolut platform over the Christmas period, as the effects of the Government’s waxing and waning restrictions on the sector played out in the data.

For example, spending in toy stores in December was up 45 per cent compared to the same month the previous year. This is likely due to the closure of toy stores as “non-essential retail” during the November anti-virus restrictions, which appears only to have had the effect of displacing related Christmas shopping activity into the following month.

Homestores and furnishings, which performed well as a retail category all through 2020 as consumers focused on improving their homes, recorded an 81 per cent jump in December on the Revolut platform. Jewellers were up 17 per cent.

The only retail categories to record falls in December spending, compared to the same month a year earlier, were department stores and shoes. Both fell 12 per cent.

In commentary accompanying the release of its data, Revolut suggested that campaigns in 2020 to encourage shoppers to do more of their online shopping with local businesses had some impact. About 43 per cent of online shopping in December was with the ecommerce offerings of local retailers, up from 35 per cent the previous year.