Retail sales plunge on back of tighter restrictions 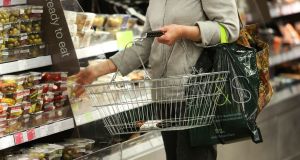 Supermarket sales were down 4 per cent in November. Photograph: Chris Ratcliffe/Bloomberg

The latest figures from the Central Statistics Office (CSO) show the bar trade took the biggest hit with sales declining by 63.9 per cent in the month.

There were also major declines for clothing, footwear and textiles (-50.9 per cent ), furniture and lighting (-47.4 per cent) and department stores (-31.7 per cent).

The figures, which coincide with the introduction of tougher restrictions in late November, show 11 of the 13 retail divisions suffered declines in sales.

Business owners: How will you cope with lockdown 3?

Car sales were down nearly 16 per cent, while sales of books, newspapers and stationery were down 9.6 per cent.

There were also declines for non-specialised stores, which include supermarkets (-4 per cent), hardware, paints and glass (-3.3 per cent), as well as food and beverages (-1.5 per cent).

November and the build-up to Christmas is normally a busy time for retailers but the pandemic has played havoc with shopping patterns.

The CSO data also showed proportion of retail sales transacted online from Irish-registered companies increased to 12.3 per cent in November, up from 6 per cent in October.

This is below the high of 15.3 per cent recorded in April at the height of the first lockdown, however.

The CSO’s figures do not cover the full extent of online sales here as they do not include transactions with non-Irish-based retailers.

On an annual basis, retail volumes were 4.7 per cent lower in November compared with November 2019. When motor sales are excluded, the volume of retail sales fell by 12 per cent in the month.