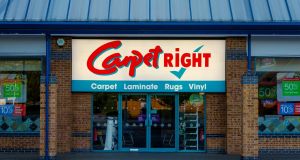 Carpetright said its Irish business had ‘an oversized store footprint which we are looking to reduce as opportunities arise’.

Listed flooring retailer Carpetright has announced that it will shut some of the stores in its Irish division. The British company has 19 outlets in the Republic.

The group, which has struggled in recent years and reported its financial results on Tuesday, said full-year sales at its Irish division fell by 5.5 per cent to €8.6 million. The bulk of the decline was accounted for by the closure of one of its Irish stores, with revenues down just 1.3 per cent on a like-for-like basis.

Carpetright said its Irish business “has an oversized store footprint which we are looking to reduce as opportunities arise”.

“We believe at the core of the Irish business we have a strong operation focused on the major cities that is capable of delivering value to the group once we have an economic operating footprint.”

This suggests that Carpetright may be mulling the future of some of its outlets located away from major cities, such as those in Mullingar, Tralee and Athlone.

The overall group said its turnaround was on track as it reported a narrowing of losses in 2018-19, and a return to underlying growth in sales in its new financial year.

The retailer said on Tuesday that it made a statutory pretax loss of £24.8 million in the year to April 27th, compared with a loss of £69.8 million in the previous financial year. Revenue fell 13.4 per cent to £386.4 million. However, UK like-for-like sales in the first eight weeks of the new financial year were ahead by 8.5 per cent. – Additional reporting: Reuters