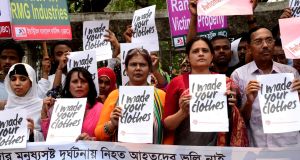 “Fast fashion” retailer Primark, which trades in its home market as Penney’s, faced protests this week in Germany after a christian group alleged that factory staff at some of the suppliers producing its clothing in Sri Lanka work in harsh conditions.

Cue calls for a boycott, but these will die out soon enough. They always do, because here’s the thing about German consumers: as Ryanair’s Michael O’Leary once said about them, they would “crawl b*****k-naked over broken glass” to get at low prices. As would most consumers everywhere, including the majority of us in Ireland.

No matter what we may say in polite company or to researchers for business ethics surveys or on our image-enhancing social media accounts, most consumers will, most of the time, choose low prices over what is perceived as “ethical consumption”.

We may say we want our companies to have ever loftier standards of corporate social responsibility (CSR), implying we’re prepared to pay for it. But empirical analysis of our subsequent buying behaviour usually proves otherwise. Some academics even have a name for the phenomenon. It is called the CSR Consumer Paradox, as outlined by French researchers Catherine Janssen and Joëlle Vanhamme.

It sounds more hypocritical than paradoxical. But let this not be a moral lecture; the discrepancy exists simply as a matter of fact. I am a sinner and I know it. I have not a single stone to cast.

Like many Irish people, I would like to think that I value a sense of fair play. That is what I tell myself, at least. But, again, like many Irish people, I’m also drawn to the appealing notion that I can dress either of my two young children in brand-new Penney’s summer gear for the price of a couple of pints.

Primark has codes of practice and it will argue that its suppliers provide much-needed employment to people, especially women, who might otherwise be much worse off. But deep in some back drawer in my mind, I also instinctively understand that if I can dress my four-year-old for a tenner, those who made the goods are likely have a far harder time at their jobs than I do at mine. I know it, yet I park it. So do many of you.

I don’t want the planet to die, and if I happened to be floating next to a dolphin choking on a piece of plastic, I’d try my best to help the poor bugger out. But, like many of you, my fridge is also half-full of exotic fruits and vegetables flown halfway across the world in mostly non-recyclable packaging that could withstand a nuclear attack. All so that I can eat well. But woe betide my local supermarket if they jacked up the price of my mangoes, or only had them in season.

I understand that burning aviation fuel is a damaging source of carbon emissions. But if there was a relative to be visited abroad, or a football match to attend, or a cheap deal on a weekend flight to some secondary European city with a nice old town and a castle, I might jump on a Ryanair flight as if it was a taxi.

These are my flaws and they are no different to many of yours. Academics who study consumer behaviour also point to a wider psychological phenomenon called “diffusion of responsibility”. This is a part of the bystander effect, which holds that the more people there are who are aware of a problem, the less likely many of them are, individually, to address it.

Faced with issues of workers’ rights, or the environment, or other perceived wrongs, many of us hide with our consumer guilt in the foliage of the market, consoled by the belief that even if we don’t do much to save the day, somebody else will step in. We diffuse our responsibility.

Companies whose ruthless business models are predicated on providing good quality for low prices know that this is how consumers behave. That is why their business models rarely change fundamentally, even under pressure.

Since O’Leary made his “b*****k-naked over broken glass” comments in 2002, aircraft emissions has become a major environmental bone of contention. Yet Ryanair is almost 10 times as large now as it was then. People may feel genuine when they say they care about the environment. But they will not stop flying.

Primark was left reeling in 2013 when more than 1,100 people died in the Rana Plaza garment factory collapse in Bangladesh. The company argues that it acted quickly to raise standards at its suppliers and compensate those affected.

Although it wasn’t the only big retailer sourcing from the plaza, Primark faced criticism that appeared, for a while, to be game-changing. Nick Clegg, then UK deputy prime minister, warned darkly, but ultimately naively, that “consumers have more power than they think when it comes to making choices about where they shop”.

Primark’s retail floor space has sprawled by 50 per cent since the Rana Plaza collapse, while Clegg now spins propaganda for Facebook, whose critics argue it may be the most socially-damaging company in history.

The world of our intentions and the world in which we live are, at times, utterly irreconcilable. Yet they are both real in a sense. Most of us live and consume, but diffuse our responsibilities, in a paradox. Who can solve it?

It looks like the end of the road for Mo-Tech Electronic Devices, a Digicel-backed Irish company that operated in the field of medical technology, with inventions such as products to remotely monitor the disabled and elderly in case of falls or accidents.

The shareholders of Mo-Tech, whose directors include former Digicel chief executive Colm Delves, have voluntarily resolved to place it into liquidation, according to recent filings. Pity. Its cloud-based products appeared to have the potential to solve a number of tricky social and medical problems.

In its last filed set of accounts, covering the year to the end of March 2017, accumulated losses had risen to €4 million from €2.3 million a year earlier. It raised almost €3 million in 2014 and its accounts suggest it had also issued more than €2 million in convertible loan notes.

The Dublin-based company was backed by small investors from Canada and the United States, as well some from Ireland, including family of the late, great rugby international Willie Duggan from Kilkenny. The largest stake, however, was owned by a Bermuda outfit called Future Holdings.

Bermuda isn’t renowned for the ease with which the ultimate shareholder of a company can be discerned. However, documents filed with our Competition and Consumer Protection Commission for a past deal for an entirely separate technology company shows that Future Holdings is an “indirectly held wholly owned subsidiary of Digicel”, which is, of course, controlled by Denis O’Brien.