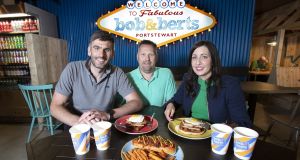 The independent coffee chain, Bob & Berts is to open eight new branches across Northern Ireland and Scotland which could create more than 175 jobs.

The chain, which was first opened by Colin McClean, his brother-in-law David Ferguson and father Arnold in 2013, has agreed new financial backing with Ulster Bank for its latest expansion plans.

Bob & Berts is one of the fastest growing independent coffee chains headquartered in the North. Two years ago, it also secured a £2 million (€2.23m) equity investment from the UK’s Business Growth Fund.

When they first set up their business in Portstewart six years ago Mr McClean and Mr Ferguson wanted to offer “something different to large multinational coffee chains”, so far their “local community” approach has helped them open 20 shops and grow their workforce to 400 people.

Mr Ferguson said the latest funding from Ulster Bank would allow them to grow faster and open more sites than they had originally planned to do because of “rising demand”.

Mr McClean believes this will benefit more communities where they locate their branches.

“Our brand is dynamic and distinctive and we’re breathing new life into the high streets up and down the country by driving footfall for the benefit of our neighbouring local retailers,” he said.

Last year, Bob & Berts expanded into Scotland and it is also hoping to find new opportunities in England over the next 12-18 months.