Cantillon: Weaker sterling is a double-edged sword for M&S 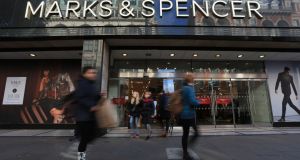 M&S’s finance chief Helen Weir said sales in Ireland in the three months to the end of December were “weaker”, as shoppers travelled across the border to Northern Ireland. Photograph: Jonathan Brady/PA Wire

For Marks and Spencer’s Irish business, a weaker sterling has become something of a double-edged sword. The clothes and upmarket food retailer only has itself to blame for any cuts it gets.

The group, which was forced to close four Irish stores in 2013 as consumers grappled with the effects of the financial crisis, happily was able in the six months to the end of September to reverse £4.2 million (€4.8 million) of impairment charges it had previously booked against its business in Ireland.

The reason? It was mainly down a stronger euro following the Brexit referendum in June, lowering the costs of importing goods into its 17 remaining stores in this country, it said in November.

The boost, of course, could only be squeezed out by failing to pass the full benefit of its own savings on to customers here.

But fast forward to this week and it would appear that M&S is finally feeling the pinch from customers in the Republic taking matters into their own hands.

On a call with analysts after M&S surprised its investors with news of its biggest sales jump in the run-up to Christmas in seven years, M&S’s finance chief Helen Weir used some of her time to bemoan developments in Ireland.

Sales in Ireland in the three months to the end of December were “weaker”, as shoppers travelled across the border to Northern Ireland because of the depreciation in sterling, she said. (It wasn’t clear from the call, however, whether M&S’s stores in North benefitted as a result or whether shoppers found even better value elsewhere.)