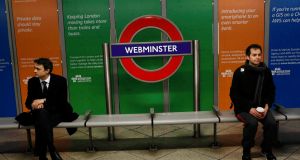 London commuters sit next to a tube sign reading ‘Webminster’ as part of an Amazon marketing stunt on Thursday. The company is on a hiring drive in the US. Photograph: Reuters

Amazon.com on Thursday said it plans to create more than 100,000 jobs in the United States, from software development to warehouse work, becoming the latest company to boast a hiring spree since Donald Trump won the US presidential election in November.

The world’s largest online retailer will grow its full-time US workforce by more than 50 per cent to over 280,000 in the next 18 months, it said in a press release.

Amazon is spending heavily on new warehouses so it can stock goods closer to customers and fulfil orders quickly and cheaply. The new hires will be key to the company’s promise of two-day shipping to members of its Amazon Prime shopping club, which has given it an edge over rivals.

Amazon employs close to 2,000 in the Republic.

Mr Trump previously had criticised Amazon, saying the technology giant did not pay its fair share of taxes. Amazon shares were up less than 1 per cent in early afternoon trading.