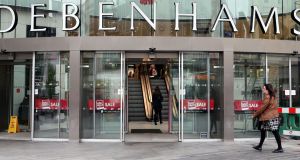 Associated British Foods said like-for-like sales at discount fashion store Primark had fallen in the Christmas period in Germany and the Netherlands as a rapid programme of new openings has eaten into sales at existing shops.

AB Foods said that on a constant currency basis, sales at Primark were 11 per cent higher in the 16 weeks to January 7th compared to the previous year, as it opened more shop space. On a comparable week basis, sales rose 12 per cent, the same pace at which average retail selling space increased in the period, equating to flat like-for-like sales.

“The lack of return to like-for-like growth at Primark in Q1 will disappoint, even if largely linked to Europe self-cannibalisation,” said Jefferies analysts in a note.

In the UK, Primark reported “good” underlying sales and growing market share, saying stock was well-managed in the period. Next last week cut its profit forecast for the current financial year after a poor Christmas and warned of a further decline in 2017-18, hitting shares of clothing retailers across Europe.

On a group basis, the company, which also has big sugar and grocery businesses, said its outlook for the year was unchanged.

Separately, retailer Mothercare has returned to UK sales growth over Christmas, but said its performance in international markets remains “mixed”. The babycare chain posted a 1 per cent rise in like-for-like sales over the 13 weeks to January 7th as it was boosted by a strong online performance. Online sales grew 5.5 per cent over the festive period and account for around 40 per cent of UK trade. The UK turnaround comes after a 2.5 per cent sales tumble in its second quarter, when sales were knocked by poor weather and a warehouse overhaul. Chief executive Mark Newton-Jones said, “The UK returned to growth following the challenging summer trading period”.

Meanwhile, the John Lewis Partnership has warned that it expects its renowned staff bonus to be “significantly lower” than last year in the face of a challenging market outlook. The company, which includes supermarket Waitrose, said that despite posting strong Christmas trading figures and pencilling in a rise in profits for the full year, a difficult year ahead and the “importance of investment for the future” mean the bonus will probably be cut. It said in a trading statement: “We have decided to comment on bonus implications at this stage because the partnership’s strong Christmas trading, and the likelihood of higher reported profits, risk overshadowing the importance the board is placing on the challenging market outlook, our determination to maintain a strong balance sheet and our commitment to accelerating our strategy. “The precise level of the bonus will be decided as usual in March, but, in view of these factors, it is likely to be significantly lower than last year.”

John Lewis department stores reported a 2.7 per cent rise in like-for-like sales over the Christmas trading period, while Waitrose saw a 2.8 per cent increase in the six weeks to December 31st.

Rival Debenhams was sitting pretty after a growth surge in its beauty and gift sections boosted sales over the Christmas period. The department store chain said group like-for-like sales rose 3.5 per cent in the 18 weeks to January 7th, as demand for beauty and gift products lifted non-clothing sales by 57 per cent. Online sales were also pushing higher, jumping 13.9 per cent over the period, thanks in part to a sales boost from a “successful Black Friday”.