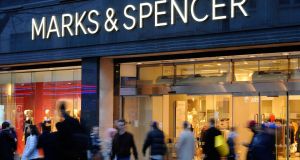 The British retailer’s clothing and home like-for-like sales rose 2.3 per cent in the 13 weeks to December 31st, beating market expectations of a 0.2 per cent rise, it said on Thursday, while food was up 0.6 per cent, also beating forecasts for a slight fall.

Mr Rowe said customers had responded to “better ranges, better availability and better prices” in its clothes, while its “special and different” products helped it increase share in the food market in the festive period.

The numbers show Rowe’s strategy of turning around its clothing business, which has struggled for five years, is gaining traction. M&S’s numbers were helped by the timing of the period, with an additional five days of the busy post-Christmas sale falling into the quarter.

It estimated timing had a positive effect of about 1.5 per cent on clothing & home sales and about 0.3 per cent on food.