Group confident of return to profitability having invested in staff, systems and outlets 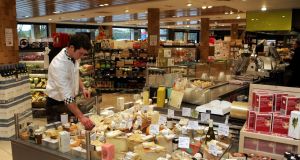 Donnybrook Fair made a net loss of almost €391,000 in the year to the end of January 2016, as the high-end grocery retailer increased its investment in staff, systems and new stores.

Turnover arrived at €23.9 million, up 1.4 per cent, in a year described by the directors as “challenging for sales growth” in accounts just filed at the Companies Office.

In a note accompanying the accounts, the directors said investments made in the period was “key to the future growth” of Donnybrook Fair and that it was confident that the group would return to profitability in its current financial year.

Administrative expenses at the company, which has six outlets in Dublin and Wicklow, rose 7.5 per cent to €8 million.

The sixth Donnybrook Fair store, in Malahide, Co Dublin, opened in December 2015, during the period covered by the accounts. The group said this had created employment for 50 people, most of them living in the local community.

Donnybrook Fair Limited employed an average of 223 people during the year, up from 173 in the previous period.

The group increased its spending on marketing during the period as a result of the launch of the new store.

Its rent costs fell following its acquisition in the previous financial year of a number of the retail units it occupies, but its interest charges increased, from about €208,000 to about €588,000.

This turned its operating profit of €212,000 into a net loss. The company retains €3.2 million in its profit and loss reserves.

Donnybrook Fair as it exists today was founded in 1991 when the Doyles bought a convenience shop on a site on the Morehampton Road, where it now also operates a cookery school.

Its expansion over the last decade has seen it open outlets of varying sizes on Baggot Street and Grand Canal Square in Dublin 2, in Stillorgan and Malahide in Co Dublin, and in Greystones, Co Wicklow.