Grafton ends year strongly with revenues up by more than 13% 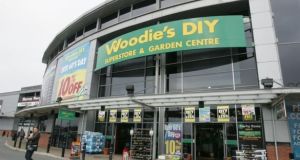 Overall, retail revenues were up 5.6 per cent on a constant currency basis last year

In a trading statement issued in advance of the company final results in March, Grafton, which operates the Woodie’s chain across Ireland and also has operations in the UK, the Netherlands and Belgium, said turnover was up 10.4 per cent on a constant currency basis.

Grafton, which trades from 650 branches and has 11,000 employees, said revenues from its merchanting division, which accounts for 92 per cent of group revenue, were particularly strong.

“The group finished the year on a more positive note and saw the benefit during 2016 of its exposure to multiple market,” said chief executive Gavin Slark.

Like-for-like revenue grew by 5.3 per cent for the final quarter, the strongest pace of growth since the first quarter of 2016.

In a note to investors, Goodbody nudged up its full-year earnings before interest, taxes and amortisation (ebita) forecast by 3 per cent to £124 million following publication of the trading update.

“This is a solid statement which along with the differentiation in its exposures, underpins our positive stance on the stock and why it is deserving of a premium to peers,” it said.

In the UK, full-year merchanting turnover was up 6.6 per cent on both an actual and constant currency basis.

Grafton said Selco outperformed the UK merchanting market with good revenue gains in established branches and growth from new branches. It said expansion of the branch network gathered pace with the opening of seven branches increasing the network to 47 in 2016. The group is to open at least 10 more Selco stores in 2017.

The group added that the rate of revenue growth picked-up in the last quarter in the traditional UK merchanting business, which trades mainly under the Buildbase and Plumbase brands, although the market remained very price competitive.

The group’s merchanting business in Ireland outperformed a recovering construction market, driven principally by growth in residential RMI activity, and reported double digit like-for-like revenue growth for the third successive year. Turnover was up 11.9 per cent on a constant currency basis.

The Netherlands merchanting business, acquired in November 2015, performed well, supported by good economic growth and a strong recovery in the residential new build and RMI markets. However, the Belgian business continued to experience “difficult market conditions with softening demand”.

The Woodie’s DIY business, which accounts for 6 per cent of group revenues, reported a “solid increase in volumes,” the group said, “benefitting from the initiatives undertaken in recent years to improve the customer proposition and a more favourable retail market.” Overall, retail revenues were up 5.6 per cent on a constant currency basis last year.

Grafton said its UK mortar manufacturing business experienced stronger demand in the second-half of the year from its house builder customer base and also increased revenue from the acquisition in 2015 of a packaged mortar products business.

Davy said the performance across the group was strong last year with the pace of the recovery in its Irish and Netherlands operations continuing to impress.

“The prospects for the stock in 2017 will be determined by the underlying conditions in its most important end-market. While recent evidence suggests that the group is navigating difficult conditions admirably, we still expect 2017 to be challenging. As a result, we expect changes to estimates to be modest at this point,” said Davy analyst Flor O’Donoghue.

Shares in Grafton were 5 per cent higher in early trading on London on Friday.

1 Should I switch bank now with Ulster Bank at risk of closing?
2 Tick all the right boxes when it comes to your house insurance
3 Will brother’s widow get half of our parents’ estate when they die?
4 Belfast mailbox address used by account holder in Russian money-laundering scheme
5 Aldi empire wracked by family feud
6 Swiss drug giant Roche pays €380m for Irish biotech Inflazome
7 EU watchdog calls for end to Covid loan payment breaks
8 Diarmuid Ó Conghaile appointed State’s new aviation regulator
9 ‘I have three children and a dog, so I feel like a bit of a human ATM’
10 Finance Ireland refinances mortgages with low level of payment breaks
Real news has value SUBSCRIBE