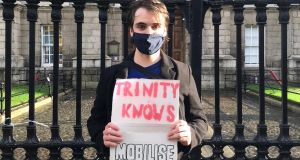 He was before Dublin District Court on Monday on charges of trespass; failure to comply with the directions of a garda, and a separate case of alleged criminal damage at Trinity College Dublin relating to graffiti painted on campus property.

Mr Browne (30), who is from Galway, is a member of a small group known as System Change Ireland (SCI), which has been mounting a campaign called Mobilise Peace in recent months. It advocates non-violent protest to highlight the failure to respond adequately to the climate crisis and the need for a new economic system.

Over the past six months, he has been repeatedly warned by gardaí to desist from protest actions in the college. The group alleges Trinity College Dublin is contributing to “climate genocide”. The college has declined to comment on the case.

A SCI spokesman, Zac Lumley, told The Irish Times that Mr Browne would be in Cloverhill Prison for two weeks following his refusal to accept bail conditions at a Monday’s court hearing.

He said the activist had mixed feelings about that. The dissonance between the scale of climate crisis and lack of political action “weighs heavily on him”, Mr Lumley added, but Mr Browne felt good as he believed his detention was a tangible way of highlighting the issue.

Mr Browne is an economics graduate from NUI Galway and was studying for a master’s degree in education in Trinity but had taken leave to work full-time in activism, Mr Lumley confirmed.

The group had repeatedly sought a meeting with Trinity’s provost to discuss the college’s role in responding to the climate and ecological crises facing the world, to no avail.

It also wanted to set up a university assembly to consider these issues, modelled on the Citizens’ Assembly, in which students, academics and non-academic staff would participate. This is with a view to having a referendum on an agreed way forward.

“As such, Ronan entered the university grounds with the intention of speaking with the provost in good faith. There, they could plan to support, encourage and prepare their students, staff and alumni for a peaceful and proportionate stand to protect life on Earth,” Mr Lumley added.

After two activists were arrested for spraying graffiti on the wall outside of Trinity’s Sports Centre during the summer, Mr Browne told college newspaper Trinity News: “Trinity need to put their research into practice. Trinity knows that our climate, economic and social systems are in a state of severe crisis, and that our specific form of economic system is to blame.”

The group has affiliations with other climate organisations in Ireland, and groups at the University of Oxford and University College London, which were demanding that scientists go beyond warning about climate disruption and “do their moral duty” by actively supporting non-violent action to address it, Mr Lumley said.