Ireland’s climate: A year of extremes, from wettest February to driest spring 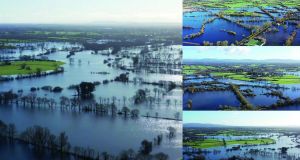 Photographs taken from drones showing the extent of widespread flooding in the Shannon river catchment during February 2020, due to 252 per cent of normal rainfall. Photomontage: Paul Scott/Irish Times Graphics Studio

Any notion Ireland in 2020 escaped the effects of global heating that is triggering more extreme weather events does not tally with Met Éireann’s data for the year.

Looking at those figures, and trends over many years, the fate of Ireland in terms of facing into more variable weather patterns with potential for extremes could not be clearer, according to Met Éireann’s senior climatologist Keith Lambkin.

His verdict on the year is emphatic: “In Ireland, 2020 is on course to be the 10th consecutive year of above-normal temperatures. A record-breaking wet February and dry spring in places led to flooding followed by a national hosepipe ban. These are extremes that we expect to see more of as our climate continues to change.”

There are enough standout figures to indicate there are no grounds for complacency in relation to extreme weather, though “there might not have been as much damage as other years – and thankfully no deaths”, he says.

For starters, Lambkin points to 2.5 times more rainfall in February – 16 of 25 monitoring stations recorded their wettest February ever – and records being broken during “a very unseasonal Storm Ellen” in August. What’s more, 19 of the 20 years of this century have had an above-normal temperature.

The picture globally is more obvious in terms of extremes. 2020 has been marked by a record hurricane season in the Atlantic; wildfires across the planet, from Siberia to the Americas to Australia; accelerating melting ice sheets in polar regions and record temperatures in a great many pockets of the planet.

In contrast, Ireland is in a “longer burner” scenario, as he describes it. We have variable weather normally, which will continue, Lambkin adds, but with potential for more extreme events, where roofs may come off stadiums and flood defence walls are broken.

So while there may be a perception that 2020 was a relatively benign year, the picture from the perspective of a climatologist looking at trends over a longer period is “very consistent”.

That means wetter winters and drier springs including droughts than we have been used to. So rainfall will increase by some 10 per cent, but how that manifests itself will be the critical factor. A complex interaction of rain, winds and tides will often combine, resulting in extreme weather events that will be increasingly evident.

In the case of February, it was the amount of rain that fell which was the standout feature. That was quickly followed an extended drying period. “So 2020 is a great example of that trend,” Lambkin explains.

Huge variation this year was typified in the switch from record rainfall to parts of the east having their driest spring on record. Countrywide, only 58 per cent of normal rainfall fell in March, April and May. During August, sustained wind and gust records were broken during Storm Ellen.

As 2020 draws to a close, the world has experienced the warmest decade on record and one of the three hottest years ever measured, according to the World Meteorological Organization.

This is in spite of a La Niña event, Lambkin says – when natural weather patterns cool global temperatures. This is expected to peak in intensity in coming weeks and continue through the early part of next year.

Record warm years usually coincide with a strong El Niño event – when surface water in the equatorial Pacific becomes warmer than average and east winds blow weaker than normal, as was the case in 2016.

We are now experiencing a La Niña, which has a cooling effect on global temperatures, but has not been sufficient to put a brake on this year’s heat, Lambkin confirms.

And despite Covid-19 lockdown, global concentrations of greenhouse gases continue to rise. “The science is complex, but the message is clear: to reduce the extremes, we must reduce the warming,” he adds. “The warming we see globally is also observed here in Ireland and it is this warming that increases the risk of more extreme weather events.”

Of most concern, this warming is “on an accelerating path, and there is no real slowing the trend downwards”.

A report by Christian Aid shows extreme weather events occurred in all continents during 2020, many of which caused death and widespread economic damage.

The report – Counting the cost 2020: a year of climate breakdown – details the most destructive climate disasters of the year.

Ten of those events cost $1.5 billion or more, with nine of them causing damage worth at least $5 billion. Most of these estimates are based only on insured losses, meaning the true financial costs are likely to be higher.

Among them is Storm Ciara, which struck Ireland, the UK and other European countries in February, costing $2.7 billion and killing 14 people.

While the report focuses on financial costs, which are usually higher in richer countries because they have more valuable property, some extreme weather events were devastating in poorer countries, though the price tag was lower. South Sudan experienced one of its worst floods on record, which killed 138 people and destroyed the year’s crops.

Some of the disasters hit fast, such as Cyclone Amphan, which struck the Bay of Bengal in May, fuelled by record warm temperatures in nearby seas, and caused losses valued at $13 billion in just a few days. Other events unfolded over months, such as floods in China and India, costing an estimated $32 billion and $10 billion respectively.

Six of the 10 most costly events took place in Asia, five of them associated with an unusually rainy monsoon. And in Africa, huge locust swarms ravaged crops and vegetation across several countries, causing damage estimated at $8.5 billion. The outbreak has been linked to wet conditions brought about by unusual rains fuelled by climate change.

Some less-populated places also suffered the consequences of a warming world. In Siberia, a heatwave during the first half of the year set a record in the city of Verkhoyansk, with temperatures reaching 38 degrees.

Whether it be floods in Asia, locusts in Africa or storms in Europe and the Americas, climate change has continued to rage in 2020

Heat and drought drove the fires in Bolivia, Argentina, Paraguay and Brazil. While there were no human casualties reported from these events, it had a terrible impact on biodiversity and the planet’s capacity to respond to a warmer world.

While climate disruption may have influenced these events, many of the countries that bear little responsibility for global warming were affected, the report underlines.

“Whether it be floods in Asia, locusts in Africa or storms in Europe and the Americas, climate change has continued to rage in 2020,” said report author Dr Kat Kramer, Christian Aid’s climate policy lead. “It is vital that 2021 ushers in a new era of activity to turn this tide. With president-elect Biden in the White House, social movements across the world calling for urgent action, post-Covid green recovery investment and a crucial UN climate summit hosted by the UK, there is a major opportunity for countries to put us on a path to a safe future.”