Thousands of passengers will be disrupted by action ‘over coming weeks’, airline says 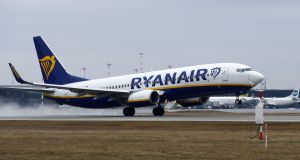 Ryanair pilots in Ireland have voted to strike over two days next week.

Ryanair pilots in Ireland have voted to strike over two days later this month in a move that could cause major disruption at the height of summer holiday travel.

Their trade union Fórsa served strike notice on the company and said pilots would notify the company of “further strike days in due course”, a situation the airline said has the potential to “disrupt the holiday travel plans of thousands of customers over the coming weeks”.

It is understood Ryanair will now begin to assess the immediate impact of the two-day action on customers next week and will contact them in the event of cancellations. Some contingency plans may yet be put in place.

With UK pilots and cabin crew in Portugal also planning to strike on August 22nd, the move will bring substantial disruption to European services on that day.

Fórsa said 94 per cent of directly-employed pilots, who are members of the Irish Airline Pilots’ Association (IALPA), which comes under the umbrella of Fórsa for industrial relations disputes, voted to back industrial action in a long-running dispute over pay, working conditions and related issues.

According to the union, IALPA submitted a 30-page proposal to Ryanair management in March seeking pay levels and structures it says are in line with sector norms. It also included proposals on pensions, working conditions and related matters.

The union entered mediation talks chaired by Kieran Mulvey on Tuesday but with the proviso that “only a substantive counter-proposal from Ryanair management” would deter pilots from taking industrial action. No such proposal was received, it said.

“(The pilots) tell me they feel forced into serving notice of potentially-disruptive industrial action by a company that seems either unwilling or unable to negotiate in a professional, transparent and constructive manner,” Fórsa national secretary Angela Kirk said on Wednesday evening.

The Fórsa statement did not give details of pay demands but Ryanair said they were looking for increases of 101 per cent on top of current annual pay of over €172,000.

“Ryanair pilots who are already among the best paid workers in Ireland are now threatening to disrupt the holiday travel plans of thousands of customers over the coming weeks,” the airline’s chief people officer Eddie Wilson said in a counter statement.

“We remain willing to engage in Mediation with our pilots and Fórsa but call on them to avoid disrupting our customers’ travel plans in pursuit of what are clearly unrealistic and un-implementable pay proposals.”