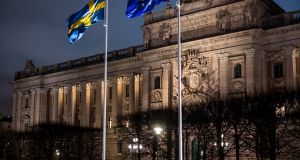 Swedish and EU flag outside the Swedish Parliament. Stockholm on Wednesday sold 1.5 billion Swedish krona (€140 million) of government bonds with an average yield of minus 0.295 per cent

Sweden has joined the club of countries that have sold 10-year debt at a negative yield in a sign of how the dramatic rally in the global fixed-income market is sweeping in to bonds with longer maturities.

The country had previously sold 10-year sovereign bonds in May 2019 with a positive yield of 0.25 per cent. It is now one of a clutch of issuers, including Germany, Switzerland and Japan, to have sold debt that is priced such that investors will face a loss if they hold the instruments for the next decade.

The rapid price rises of government bonds over the past few months means investors have to either look for bonds of longer maturities, or further down the risk spectrum, in order to generate positive returns.

Signs of a deterioration in Sweden’s economy, along with a slowdown globally, have also put downward pressure on the country’s bond yields.

Sweden’s Riksbank was the first major central bank to experiment with negative rates, and has held its benchmark lending rate below zero since early 2015. Others like the European Central Bank followed suit as they attempted to boost inflation in the wake of the 2008-09 financial crisis, and the euro-zone debt crisis that followed.

The Riksbank had embarked late last year on a tightening cycle, increasing its repo rate to minus 0.25 per cent from minus 0.5 per cent. However, since then, data have shown that the world economy is on a less-steady footing.

The ECB is broadly expected to reduce its main lending rate deeper into negative territory, while the US Federal Reserve has cut rates, with more reductions expected.

Sweden’s export-oriented economy, which is exposed to the trade skirmish between the US and China, has also been showing signs of strain. Gross domestic product slipped by 0.1 per cent in the second quarter from the first, missing expectations for a 0.3 per cent expansion, according to data released at the end of last month.

A report released on Wednesday showed the annual increase in core consumer prices, which excludes energy, fell to 1.7 per cent in July from 1.9 per cent in June. The decline added further credence to the argument that the Riksbank may need to either halt its tightening or even begin to loosen monetary policy.

“With news on the economic front going from bad to worse, a strong case can be made for further...easing in Sweden,” said David Oxley, economist at Capital Economics.

He added: “Set against an increasingly dovish global backdrop, in which the ECB is likely to join the Fed in cutting rates next month, an ‘emergency’ cut in Sweden would not be out of kilter.” – Copyright The Financial Times Limited 2019