Spending on blockchain set to reach nearly $16bn by 2023 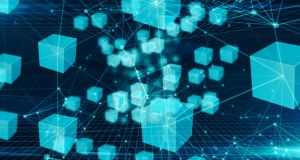 Worldwide spending on blockchain solutions is expected to rise by over 80 per cent this year to $2.7 billion (€2.4 billion), according to a new forecast.

Moreover, research company IDC estimated that the amount invested in blockchain will jump to nearly $15.9 billion in 2023.

The company said it expects spending to grow at a “robust pace”, with a five-year compound annual growth rate (CAGR) of 60.2 per cent between 2018 and 2023.

The banking sector will account for roughly 30 per cent of total spending over the forecast, deploying the technology in areas such as cross-border payments and settlements.

Discrete manufacturing and process manufacturing will be the next-largest industries with a combined share of more than 20 per cent of overall spending.

Process manufacturing will also have the fastest spending growth at 68.8 per cent CAGR to become the second-largest industry for blockchain spending by the end of the forecast period.

Other industries expected to significantly increase spending over the coming years include professional services, retail and utilities.

“Behind the sometimes heated public discussions and debates over blockchain, enterprise adoption of the technology has quietly reached a tipping point across multiple use cases. Companies are recognising value from initial pilot programs and moving those projects into production,” said James Wester, IDC’s research director for worldwide blockchain strategies.

Spending on blockchain solutions in the US will be nearly $1.1 billion this year, making it the largest geographic market by some distance. Spending in Western Europe and China will likely hit $661 million and $304 million respectively.