There are even clouds above his beloved Glasgow Celtic, which is listed in London 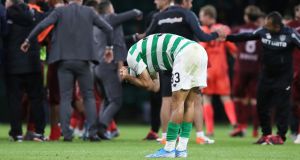 We don’t know if Dermot Desmond is a fan of U2 but when it comes to the performance of some of his stock market-listed investments, the businessman appears to be stuck in a moment and he can’t get out of it.

Desmond is said to have broken even on his recent exit from Independent News & Media, but that must have been scant consolation for having his name repeatedly dragged into coverage of the soap-opera that INM became in recent years. Billionaires don’t buy into newspaper businesses to get bad press.

Warning lights on the dashboard of Datalex, the airline software group where he controls almost 30 per cent, have been flashing all year. Its shares have been suspended since May over accounting issues and he has had to throw it a €10 million lifeline. Things are getting worse before they get better.

There are even clouds above his beloved Glasgow Celtic, which is listed in London although its shares barely trade. The Bhoys were dumped out of the Champions League on Tuesday, which could cost the club €15 million to €20 million.

And then there is Mountain Province Diamonds, the Canadian miner that this week received a warning from Nasdaq that its listing is under threat over a collapse in its share price and the consequences of this for its compliance minimum price listing rules.

If MPD loses its Nasdaq listing, there will be consequences for the business. Resource companies live or die on their ability to raise equity to fund exploration. If MPD loses its Nasdaq listing, the stock will lose vital liquidity, making it harder to sell new shares. If that happens, the chances of existing shareholders such as Desmond having to stump up in future increase.

If so, he might be best served biting the bullet and taking MPD private now. In the words of Bono: “Don’t say that later will be better ...”