Results are out and you are all set for college life: but what tech should you stock up on? 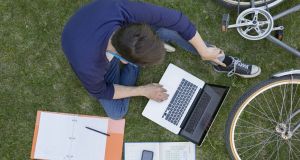 The countdown to college has begun in earnest. But if you are planning on stocking up on some tech essentials, what should you be looking for? From laptops and tablets to smartphones and smart tech, there are plenty of choices to make – so invest wisely.

Despite being pronounced dead several times over the past few years, laptops have clung on. It’s not that surprising when you think about it: they are easy to use, especially when you are typing long essays; there is a range to suit almost every budget; and they can be a bit more robust when you inevitably drop it off a table.

You may want a €2,000 laptop with all the bells and whistles, but your budget may be only for a few bells and just the one whistle. So what should you consider when you are buying a laptop for college?

Specs: There is a big difference between the requirements from a laptop for those who plan on using it for taking notes, getting online and maybe streaming a TV series or two, and those who need to render 3D graphics or work with resource-hungry programmes.

The former group could probably get away with a lower-priced Chromebook; the latter may need something with a bit more. Look for a decent amount of RAM – 8GB should do most common tasks, but users of more power-intensive applications will need more. 12GB should cover most.

Size: Small laptops may seem like a good idea, but screen size and keyboard design are worth considering. A 13-inch laptop is middle-of-the-road: easy enough to carry around but not so small that you’ll find it difficult to use. The Surface Laptop 2 comes with 8GB of RAM, a 128GB solid state drive and a 13.5-inch screen.

Battery life: Look for something with a battery life that will last you several classes before you need to charge it. Ideally, you should shoot for eight hours to get a full day out of your device, but five will get you to lunchtime comfortably. If you’ve got €1,000 in your budget, Asus has an Intel Core i5 Zenbook that has battery life of up to 13 hours; the MacBook Air will set you back €1,279 and give you about 12 hours.

Weight: One last thing to consider is weight. If you are going to be carrying around a laptop every day, make sure it’s something that won’t weigh you down. There are plenty of lightweight options on the market, although if you want a thin and light laptop that also has lots of features built in, you may want to reassess your budget.

Tablets have some advantages. Lighter than a laptop, they can double up as a work and leisure device, taking notes in class but accessing your Netflix account in the evenings.

Lenovo’s Tab 4 is a 10-inch tablet with a quad core processor and 16GB of storage. That adds up to a decent-sized screen, expandable storage space and a decent processor that should handle most tasks. It comes in at just under €200.

If you want something more iOS-flavoured, the Apple iPad starts at €369 and supports the Apple Pencil, which is handy for taking notes but also €99 extra.

At the top end of the tablet market, you have the iPad Pro, which starts at €969 and comes with a lot more power than the regular tablet. Samsung has also just announced the Tab S6, which means you can pick up the previous version for a little bit less, if Android is more your speed.

This is another that will be dictated by budget. At the premium end of the market, you could easily spend over €1,000 on a smartphone that will organise your life, let you do your college work on the move and also run your social life singlehandedly.

But budget doesn’t have to mean rubbish. The Nokia 4.2 costs €149 with Vodafone, and it comes with a dual rear camera, biometric face unlock and a decent Snapdragon chipset. It won’t challenge the iPhone, but it will get you through a year or two and keep you in touch with friends.

If you are willing to spend a little more, Google’s Pixel 3a XL offers more than the price tag indicates. It has a good camera, a fingerprint reader and a decent version of Android that won’t suck up your storage space with too much bloat. Plus it costs €479.

If money is no object, you can opt for the iPhone Xs Max, which is pricey but big enough for you to do a bit of research, send some emails or work on the move, but small enough to fit in your (larger) pockets. And in a couple of weeks’ time, there will be the Samsung Galaxy Note 10+, which is pricey at more than €1,200, but comes with a 6.8-inch screen and the ability to take notes and convert them to text with the S Pen stylus – thus eliminating the need for any extra devices.

There are plenty of devices out there that can help ease your time in education, whether it is giving a helping hand in reading notes, or convert your notes to digital.

The C Pen Reader Pen (£250) is aimed at people with reading or vision difficulties. It is a small pen that will read printed text aloud simply by scanning the pen over a line or two at a time. It uses optical character recognition (OCR), and a small OLED display shows the text the device has recognised before storing it in the pen’s memory. There is also a headphone jack that can be used if you are somewhere that reading aloud is not possible or welcomed: the train, the bus, the library, for example.

If you want to keep a digital copy of your notes but your typing is less than stellar, there are options. Livescribe has a number of pens that will create a digital copy of your notes as you take them – as long as you use their specially marked paper. Moleskine has a similar system, Pen+, thanks to a tie-in with Neo. But again, it requires special paper and that isn’t cheap.

The Wacom Bamboo Slate does almost the same job as the Livescribe system, in that it digitises your notes and drawings. The main difference here, though, is that there is no special paper required; all the important technology is built into the Slate, which looks like a fabric-covered slab, and the special pen. You slot your notebook into a small holder to keep it in place. Once you are writing, drawing or scribbling inside the correct area, the system will record your notes and allow you to transfer them straight to your phone via the accompanying Inkspace app at the touch of a button. You’ll need to do that each time you finish a physical page of notes, or else you will end up with a mess of overwritten pages, but it only takes a couple of seconds. Two other things to remember: keep it charged, via microUSB, and don’t lose the pen. Without it, the Slate is worthless.

There is almost always an app for whatever you need, and school is no exception.

If you are permitted to record your college lectures, having the voice notes can be invaluable. You can replay the lectures and transcribe them if needed for later study. Even better is having an app that can do it all for you, like Otter.AI. The app is a voice recorder and transcriber, sending your recordings to the cloud to transcribe and then return to you, with an accompanying voice track that makes it easy to review and edit as you see fit. It’s not 100 per cent accurate, but it certainly cuts down on transcription work. And the first 600 minutes a month are free; after that, it costs €10 for up to 6,000 minutes each month.

An easy way to keep notes with you at all times, Good Notes 4 creates digital notebooks that you can sync across all your Apple devices. For example, you can create a notebook on an iPad and pick it up on your iPhone, or view it on a Mac. On the iPad, it works with Apple Pencil, but you can also use it with less high-tech styluses and, at a push, your finger. You can export notebooks and share them as PDFs and images, and because the app syncs every time you get an internet connection, it’s effectively the end of lost notebooks.

A free app that can keep track of most of your college work, Evernote is a catch-all app. You can have your own notes, save web clippings and upload photographs, but you can also use the platform to collaborate on projects with groups. The free version is limited to a certain number of uploads per month, but in years of using the app, I’ve never hit it.

1 House asking prices rebound but will likely fall again - MyHome
2 Plans for €2bn Dart expansion lure Bombardier to Dublin
3 TV guide: Pros and cons of broadcast television options
4 Ireland has among highest rates of home-working during Covid
5 There may be trouble ahead for the housing market
Real news has value SUBSCRIBE