US bond market recently gave off a classic signal of a coming recession. Should investors be spooked? 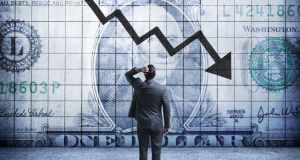 A paper from the San Francisco Fed last year found that yield curve inversions are the most reliable predictor of recession risk. Photograph: iStock

US stocks are near all-time highs after enjoying a very strong start to 2019 but worries regarding a looming recession continue to linger. The chief cause of concern is that, after a decade-long economic expansion, the US bond market recently gave off a classic signal of a coming recession. Should investors be spooked? Well, some investors were certainly spooked by the recent inversion in US bond yields, as evidenced by the fact that stocks suffered their biggest one-day fall since the beginning of January.

An inverted yield curve occurs when short-term bonds (in this case, three-month bonds) yield a higher rate than long-term (10-year) bonds. Investors sit up and take notice because, ordinarily, the opposite is the case, with higher long-term yields rewarding investors for the risk of waiting longer to get paid.

The consensus view is that inversions are an indicator of a policy mistake from central bankers, with investors betting that the Federal Reserve will have to cut rates in order to shore up a slowing economy. The yield curve has inverted prior to each of the last nine recessions in the United States.

This inversion, coupled with the fact that the Federal Reserve has performed a major policy U-turn over the last few months by abandoning its rate-hiking plans, has led many to worry that recession risk is high and rising. A variety of strategists have cautioned that too much should not be read into the recent inversion. Not only can there be a long lead-in time between inversion and recession, other economic indicators suggest the US economy is unlikely to tumble into recession any time soon.

US manufacturing data, for example, was unexpectedly strong in March, with the Institute for Supply Management’s (ISM) manufacturing index rising to 55.3 – encouraging, given that all but one recession since 1960 was preceded with sharp declines into sub-50 readings. Stock prices suggest most investors are not ready to call time on the bull market just yet, with indices hitting new highs for 2019 less than a fortnight after the inversion-inspired selloff.

Panic then took hold of markets in December, a troubled month which saw the first partial inversion since 2007, with three-year bond yields exceeding five-year bonds. Again, bulls made the case for calm, noting this spread has historically had much less predictive power than others. Stocks have enjoyed a strong recovery since the December selloff, but bears argue this latest inversion is potentially a more serious affair, one that testifies to increased doubts about the sustainability of this long US economic expansion.

Not everyone is convinced by the apparent power of the yield curve. In a note last year, UBS chief economist Paul Donovan scoffed that investors “often cling to myths and legends, as easy ways to explain a complex world”, adding there are “two very obvious reasons not to believe the story” about the idea that the yield curve is some sort of bulletproof indicator.

The first is it “suggests bond dealers know more about the future than economists”, something that “does not seem very likely”. The second is it indicates the US yield curve “has some magic ability to forecast the future”, even though other countries’ yield curves do not.

Japan’s economy has suffered numerous recessions since 1991, notes Donovan, but its yield curve has not inverted during that time; the UK yield curve has inverted for years at a time without a recession; Germany’s yield curve inverted prior to the 1991 economic boom and the 2013 recovery, but failed to invert ahead of the 2016 slowdown.

“If bond yield curves can predict, they should be able to predict everywhere,” he says. “They do not.” A raft of other observers have offered similarly consoling words. Goldman Sachs says the slump in 10-year bond yields can be partly attributed to factors outside the US. That’s echoed by RBC Capital Markets, which says US yields have “decoupled from growth in a very material way” and are instead partly reflecting economic concerns regarding Europe and beyond.

Meanwhile, a number of Federal Reserve officials have downplayed the issue, their nonchalance encapsulated by the message from San Francisco Federal Reserve Bank president Mary Daly that she is “not freaked out” by the inversion in bond yields.

Still, some of Daly’s colleagues are less sanguine, with a paper from the San Francisco Fed last year finding that yield curve inversions are the most reliable predictor of recession risk. When markets priced in a monetary policy easing over the subsequent 18 months, the study found, a recession was “quite likely in the offing”.

Not only that, an updated version of the study published in February warned that the outlook had deteriorated, with yield spreads now forecasting a “substantially elevated probability” – as high as 50 per cent – of recession. Strategists at Citigroup, too, are concerned, warning last month that yield changes indicated the odds of a recession in the next year to be in the range of 37 to 45 per cent.

Certainly, the track record following previous inversions suggests cause for concern; according to Ritholtz Wealth Management’s Michael Batnick, recessions have followed each of the last nine inversions. On average, stock markets peaked eight months after the time of the inversion, says Batnick, with the economy falling into recession 14 months from the time the curve inverts.

Of course, no two examples are the same; in some instances, things can keep humming along nicely for years. And investors can miss out on substantial gains if they bail out too early. Equities soared 26 per cent after the yield curve inversion in early 2006, continuing to advance until evidence regarding the troubled banking system became too obvious to ignore. Stock returns following past inversions have ranged from 15 to almost 60 per cent, according to Medley Global Advisors.

March’s inversion ended in early April so it may well be a “head fake”, says Bank of America Merrill Lynch. The question of duration is also stressed by Prof Campbell Harvey of Duke University, who is credited as having first discovered the yield curve’s predictive power in 1986. On average, an inversion must last for three months for it to be sending a clear recession signal, says Harvey, with recessions then typically following over the following nine to 18 months.

An inverted yield curve in a fully-valued market has “implications” for stocks, says Morgan Stanley, which says investors should be “defensively positioned”. That said, the bank agrees that any inversion would need to last for a few months for the Federal Reserve to get “uncomfortable”. In other words, March’s inversion may be a minor affair that is soon forgotten by investors. However, if the yield curve remains inverted over a longer period of time, markets and policymakers may well get nervy once again.