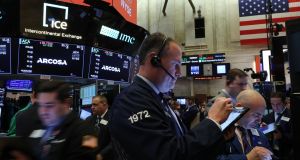 The S&P 500 posted double-digit gains in the first quarter after three consecutive monthly advances, something that might unnerve cautious types who assume what goes up, must come down. Photograph: Spencer Platt/Getty Images/File photo

Market rallies can sometimes be testing affairs, with indices lurching about wildly in both directions, but the lack of volatility means investors have so far enjoyed a nerve-free ride this year. After going as high as 36 during December’s market meltdown, the Vix – Wall Street’s fear index – was trading at 13 last week, close to its low for the year and way below historical norms.

Other volatility measures paint the same picture. The number of times the S&P 500 has gained or fallen by at least 1 per cent is lower than normal, notes Datatrek Research, with the key driver being the Federal Reserve’s U-turn on its rate-hiking plans.

This volatility lull is “particularly unusual” in a late-cycle stock market, it says, with large swings typically seen in the latter stages of bull markets. The upsurge in volatility in 2018 was in keeping with late-cycle norms, with things becoming especially hairy during the last quarter. Ordinarily, that volatility carries over into the first quarter but not this time, despite the fact there were no shortage of things to fret about, ranging from US-China trade uncertainty, recessionary fears and Brexit-related chaos in the UK. JPMorgan chief Jamie Dimon last week cautioned fourth-quarter volatility “might be a harbinger of things to come”. Datatrek agrees markets “should be experiencing more volatility this late into the economic cycle”, but the Fed’s dovishness means things may “remain tame” for the coming months at least. [CROSSHEAD]Stock gains augur well for 2019[/CROSSHEAD]

The S&P 500 posted double-digit gains in the first quarter after three consecutive monthly advances, something that might unnerve cautious types who assume what goes up, must come down. In reality, market strength augurs well for the rest of 2019, according to data from LPL Research’s Ryan Detrick. Stocks have gained in January, February and March in 19 previous years since 1950; not only were second-quarter returns better than average, so were returns over the rest of the year, with stocks advancing in all but one instance.

Similarly, Detrick found 10 instances where stocks gained at least 10 per cent in the first quarter; again, further gains occurred in all but one instance. The fact stocks never once closed below their December low in the first quarter is also bullish; that has happened in 34 previous years, says Detrick, with stocks posting full-year gains every single time. 2019 might be different, of course, but the data suggests investors shouldn’t be wary simply because stocks have been strong recently. The old saying that history doesn’t repeat but it does rhyme comes to mind, says Detrick. “Hopefully 2019 will keep rhyming”. [CROSSHEAD]Chinese stocks continue to soar[/CROSSHEAD]

Chinese stocks have led the global market rally, soaring 30 per cent in the first quarter and hitting their highest level in a year last week. A number of factors are driving the enthusiasm – data last week showing a manufacturing rebound, speculation that US-China trade deal negotiations are entering their final stages, the fact that influential index provider MSCI is about to quadruple the weighting of mainland Chinese stocks in its global benchmarks. Unsurprisingly, some investors are questioning the sustainability of the rally, JPMorgan said last week, now that price-to-earning valuations are back to their long-term average. Still, we’ve already noted momentum tends to be bullish for US stocks and that’s even more the case with China.

Quite simply, the norm is for stocks to take off, says Fundamental Capital’s Troy Bombardia. He found 14 previous instances where Chinese stocks gained at least 25 per cent over a three-month period. On average, stocks had added on another 10 per cent within a month; within three months, they were 16 per cent higher; within six months, 23 per cent; and a year later, stocks had averaged gargantuan gains of 80 per cent. The stats are distorted by huge gains in the early 1990s but while the Chinese market has calmed down somewhat since those demented days, it remains a volatile, sentiment-driven market dominated by retail investors who often adopt a “buy high, sell higher” attitude. [CROSSHEAD]Hedge fund activism doesn’t work[/CROSSHEAD]

Activist hedge funds activists say they change companies for the better when they take a stake and make the case for change; their detractors say they’re short-termist raiders out to make a quick buck. They’re both wrong, according to a new study, The Unfulfilled Promise of Hedge Fund Activism. It finds hedge funds to be “economically unimportant”, with the study giving three reasons why activism has “mostly disappointed”.

Firstly, they are no better at generating ideas than corporate managers. Secondly, they “likely suffer from a form of winner’s curse”, with hedge fund activists too pessimistic about the firm they target. Thirdly, they often target declining businesses that may already be “unsalvageable”.

Whatever the reason, the data is clear; hedge funds are neither a “threat to corporate strength” nor a “meaningful force for better corporate performance”.

1 Major credit union plans to limit savings accounts to €40,000
2 Brother is dragging his heels as executor of uncle’s will - is there anything I can do?
3 Inflated GDP data set to cost Ireland in share-out of EU recovery fund
4 Tesla’s Elon Musk calls for breakup of Amazon in tweet
5 Passengers face queuing in car parks at Dublin Airport
6 Student accommodation sector set for harsh Covid-19 lesson
7 Woodchester founder Craig McKinney dies
8 Land dispute between Citywest Hotel owner and neighbours before court
9 ‘I have a talent for justifying purchases’
10 Revenue tells court it was entitled to raise €1.64bn tax assessment against Perrigo
Real news has value SUBSCRIBE
Save money on international transfers