Stephen Moore described as lacking ‘intellectual gravitas’ for the role 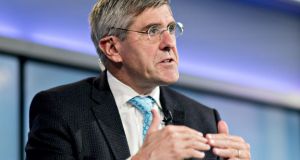 Stephen Moore speaks during a Bloomberg Television interview in Washington, DC, on March 22nd. Trump said he’s nominating Moore, a long-time supporter of the president, for a seat on the Federal Reserve Board. Photographer: Andrew Harrer/Bloomberg

Investors should be alarmed by US president Donald Trump’s decision to nominate his chief economist, Stephen Moore, for a powerful post on the Federal Reserve Board.

Moore, said Chicago economist Prof Steven Durlauf, is an “ideologue, charlatan, and hack”, a reaction echoed by economists across the political spectrum.

The US senate should “just say no”, said former Bush administration adviser Prof Greg Mankiw, who warned Moore doesn’t have the “intellectual gravitas for this important job”. Indeed.

His writings are famously unreliable, so much so that a Kansas newspaper banned him after having to make major corrections to a Moore op-ed.

When the Fed was battling deflation during the global financial crisis, Moore was warning of hyperinflation and the prospect of Americans carting “wheelbarrows full” of cash.

Hawkish then, he regurgitates Trump’s dovish position these days, recently calling on the Fed to cut rates by half a point – an extreme position – and for Fed chief Jerome Powell and his fellow board members “to be fired for economic malpractice”. In 2011, Republican senators rejected Obama nominee Peter Diamond – a Nobel economist – as insufficiently qualified.

Now, they’re sticking up for Moore, who admits he is “kind of new to this game” and “going to be on a steep learning curve”.

As the world’s most important central bank, the Fed has always been independent and staffed by serious economists (including Trump’s prior nominees).

Appointing Moore would represent a serious threat to this independence and would indicate nowhere – not even the Fed – is immune to the intellectual recession that has swept America during the Trump presidency.

US recession talk is once again occupying financial markets.

The swiftness of the Federal Reserve’s recent dovish policy U-turn had many wondering if the economic outlook was softer than it appeared.

That suspicion was reinforced by the recent yield curve inversion, with three-month US government bond yields now higher than 10-year bonds for the first time since 2007.

Long viewed as an indicator of a weakening economy, inversions have predicted every US recession over the last 60 years. So time to get out?

Alas, markets are never that easy.

Optimists take the view that inversions increase the likelihood of looser monetary policy and note the S&P 500 went on to rise 26 per cent after the yield curve inverted in early 2006.

That was not an anomalous episode; returns during yield curve inversions have ranged from 15 to almost 60 per cent, says Medley Global advisers, with the best returns often seen in the later stages of bull markets.

Others argue an inversion is not necessarily bearish or bullish, saying the yield curve may be less predictive than in the past due to the last decade’s extraordinary monetary policy. A variety of names – former Fed chief Janet Yellen, Allianz chief economist Mohamed El-Erian as well as strategists at Goldman Sachs and Fidelity International – have cautioned against reading too much into the recent inversion.

Still, flattening yield curves have become increasingly topical over the last year and with stocks suffering their biggest one-day fall since January 3rd following the recent inversion, nervous chatter regarding a global slowdown may not die down any time soon.

For all the worried talk of yield curve inversions, stocks have remained in a definite uptrend in 2019.

The S&P 500 is on the verge of a so-called golden cross, with its 50-day moving average about to rise above its 200-day average.

Is this evidence the bull market is alive and well, or mere technical mumbo-jumbo? Sceptics note there’s no evidence to support fears regarding the death cross, this indicator’s bearish equivalent.

However, it turns out golden crosses actually have a strong track record in the US.

Median returns over the one, three and six-month periods following golden crosses are all stronger than normal, according to Bespoke Investment.

Indeed, there have been six golden crosses since 1998, with stocks higher over each of those periods on every occasion.

With US earnings season about to get into full swing, investors will be hoping to hear sunny messages of optimism from corporate managers, but new research suggests they should be careful what they wish for.

A study published in this month’s Journal of Financial Economics indicates corporate executives are prone to the same behavioural biases as investors.

Analysing words used by managers in conference call transcripts and financial disclosure documents, the researchers found executives tend to be overly optimistic when the economy and the market peak.

Managers are especially positive following strong profits growth over the previous quarters, causing them to overinvest and thus ensure lower investment growth and poorer earnings over the next two years.

Like other sentiment measures, manager optimism should be viewed in a contrarian light.

The talking heads on financial TV might be joyous when CEOs are in high spirits, but the reality is you really can have too much of a good thing.