Timing continues to elude investors in search of returns 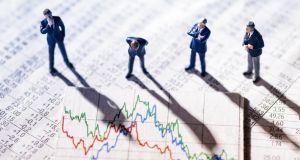 Yes, most investors are awful at timing. Photograph: iStock

Investors ran for the hills as stocks plunged over Christmas, with retail sentiment surveys showing pessimism at five-year highs. Now, 20 per cent later, investors are sanguine, with pessimism falling to its lowest level in more than a year. You have to ask: why are investors so bad at market timing? Is it really that difficult? Or should investors heed the old cliché that time in the market is better than timing the market? Certainly, there’s no denying most investors are lousy when it comes to timing the markets. As mentioned, pessimism surged in the wake of December’s heavy market falls, as evidenced by the weekly American Association of Individual Investors (AAII) polls, suggesting many missed the furious rally that followed. That’s a pattern that repeats time and time again.

Optimism hit seven-year highs in January 2018, just before global indices topped out. A drawn-out correction resulted in pessimism hitting three-year highs in February 2016, just prior to an S&P 500 gain of almost 60 per cent in less than two years. Most famously, pessimism hit an all-time high in March 2009, which happened to be the best buying opportunity in a generation. The AAII polls are regarded as a “dumb money” indicator, although the so-called smart money isn’t really smart when it comes to timing.

The same picture is reflected in fund manager surveys, with professional investors typically getting spooked in times of trouble and complacent in times of plenty. Countless studies confirm the same thing – market timing tends to be a costly business.

“We’re wired to avoid pain and pursue pleasure and security,” he writes. “It feels right to sell when everyone around us is scared and buy when everyone feels great. It may feel right – but it’s not rational.”

Psychological and scientific research bears out Richards’ point that we are wired to seek safety. Anxiety literally changes our thinking. It’s not just that you entertain catastrophic “what if” thoughts; the “fight or flight” response in times of anxiety means such thoughts seem more credible, more urgent, more dangerous. As a result, when stock market losses are on the front page and investors are being instructed to “sell everything”, as RBS famously said near a market bottom in early 2016, all too many investors do just that.

Fear of losses aside, it’s notable that the amygdala – a part of the emotional brain associated with anxiety – fires strongly when we make decisions that go against the group. In other words, saying you will be greedy when others are fearful is a lot easier than doing it. The litany of cognitive biases that bedevil human judgment – well-documented in recent years by behavioural finance experts like Richard Thaler and Daniel Kahneman – worsen the situation further.

And then there’s politics. The S&P 500 soared 8 per cent in January, its biggest monthly gain in over three years, but not all investors benefited equally. Republican investors loaded up on stocks in January, according to a survey conducted by the Spectrem Group during Donald Trump’s controversial US government shutdown, but Democrat investors underperformed because they reduced their equity allocations.

Various studies confirm this was not an isolated incident, with investors becoming more optimistic when the party they support is in power and less optimistic when out of power.

In other words, stocks ultimately went nowhere for 1,012 months, with all the returns contained in a relatively narrow window of extreme months.

Swedroe’s data shows the same is true of developed markets outside the US. Over the last 49 years, you’d have bagged all the gains if you’d been invested for the best 49 months, with gains and losses cancelling each other out over the 539 other months. Emerging markets follow a similar pattern.

In other words, stocks can make big movements over short time periods and, if you’re unlucky enough to be out of the market for that period, you’re in trouble. The dream of exiting right before a major top is an alluring one, of course, although exiting and re-entering at the exact right time is just that – a dream. Most investors would probably be over the moon if they thought they could get out one month before the top and get back in again one month after the bottom.

Over the last three decades in the US market, however, that would actually have delivered the same result as being fully invested throughout the period, according to New Zealand firm Hamilton Hindin Greene. The difficulty of getting the timing right is also stressed by Bank of America Merrill Lynch strategist Savita Subramanian. Exiting too early can be costly. Since 1930, stocks have enjoyed median gains of 14 per cent in the six months prior to a major peak and 21 per cent in the 12 months prior to the top. The declines after a peak are bad – stocks fell by 12 and 15 per cent in the six- and 12-month periods after the top – but they don’t offset the aforementioned gains.

Even after more severe selloffs, indices typically recover losses within two years. Overall, the data suggests investors are likely to be better off by staying invested rather than by trying to time tops and bottoms.

Still, even the best strategies can be difficult to stick with, suffering long periods of underperformance (both trend-following and value investing have underperformed over the last decade) that causes investors to bail out too early. To return to the original questions: yes, most investors are awful at timing. Yes, it really is that difficult, with even sophisticated investors finding it difficult to outperform. And yes, it’s hard to disagree with the old cliché that time in the market is more important than timing the market.