Lost? What is the ICIJ’s Paradise Papers project?

96 news organisations from around the world, including The Irish Times, investigate "The Paradise Papers" - 13.4 million documents on global money. Video: ICIJ 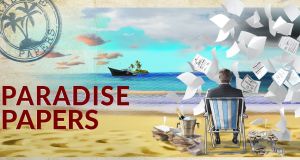 More than 380 journalists have for the past number of months been searching the 13.4 million documents leaked to the German newspaper Süddeutsche Zeitung and shared by it with the ICIJ and its media partners.

The bulk of the documents come from the Appleby offshore law firm and its offshore fiduciary arm, which is now called Estera, but the leaked material also includes documents from the Asiaciti Trust corporate services firm in Singapore, and a number of offshore or secrecy jurisdictions.

The ICIJ, which is funded by public donations, has previously organised the Panama Papers, Luxleaks, and Swissleaks projects, with which The Irish Times was also a media partner.

Other media partners involved in the Paradise Papers project include the New York Times, Le Monde, the Guardian, and the BBC.