Why has the UK’s rate rise triggered a slump in sterling? 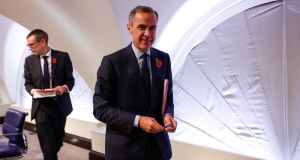 Bank of England governor Mark Carney. His suggestion that further rate rises would only be “gradual and limited” has been interpreted as meaning perhaps only one more rise in 2018, and ultimately a negative for sterling. Photograph: Getty Images

You might be wondering why the Bank of England’s first interest rate rise in a decade has triggered a slump in sterling, heaping further pressure on exporters in Ireland.

Conventional economic wisdom tells us that raising rates should strengthen the value of a country’s currency rather than weaken it, with investors lured in to avail of higher rates of return.

In the new era of forward guidance, however, the Bank of England’s decision had been telegraphed in advance, and digested as a fait accompli by currency traders. Hence the focus has been the central bank’s outlook and specifically whether Thursday’s rate change signals the start of a cycle of rate rises or what analysts are calling a “one-and-done rate increase”.

Bank of England governor Mark Carney’s suggestion that further rate hikes would only be “gradual and limited” has been interpreted as meaning perhaps only one more rise in 2018, not what the currency hawks were hoping for and ultimately a negative for sterling.

The reason for the central bank’s wary approach relates to Brexit and the political and economic uncertainty hanging over the UK.

Mr Carney said Britain’s exit from the EU was the biggest factor determining the country’s long-term economic prospects, noting it had already pushed up prices and weighed on growth.

He also said that Brexit had exacerbated Britain’s long-standing productivity problems by deterring businesses from making new investments, a factor which is likely to frustrate Chancellor Philip Hammond’s budgetary plans.

With UK inflation at 3 per cent – a five-year high – basic economic theory calls for a rate hike to anchor the upward momentum in prices. Yet withdrawing monetary stimulus too sharply risks compounding the current weakness in consumption and investment, which have been dampened by Brexit.

Also, the pick-up in inflation is largely down to temporary factors – the slump in sterling. Wages and underlying prices are not increasing that much, all of which makes the interest rate call a tricky issue.

Nonetheless the majority of Bank of England policy-makers who voted for the rise felt they could no longer tolerate above-target inflation despite the Brexit uncertainty.