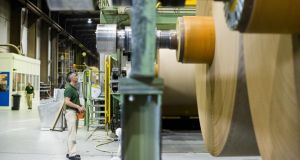 Smurfit Kappa: total corrugated-cardboard volumes across the group grew by 3 per cent in the third quarter of 2017

Shares in Smurfit Kappa Group surged on Wednesday as investors looked beyond an earnings drop at the cardboard-box maker for the first nine months of the year to focus on an expected strong performance in 2018 as the company continues to drive through price increases for its end product.

The Dublin-based group’s earnings before interest, tax, depreciation and amortisation fell by 3 per cent in the first nine months of the year, to €889 million, meeting analysts’ consensus expectations and dragged down by higher input costs and the dollar’s weakness against the euro.

Total corrugated-cardboard volumes across the group grew by 3 per cent in the third quarter, although the price of recycled cardboard, used to make many of its products, resulted in a €40 million “headwind” for the business.

Smurfit Kappa “will continue to offset these cost pressures through further corrugated price recovery and ongoing efficiency improvements as we progress towards the year end and into 2018,” the group’s chief executive, Tony Smurfit, said in the third-quarter update report.

Its chief financial officer, Ken Bowles, told The Irish Times that the group has increased its corrugated prices by about 3 per cent from a low point at the end of the first quarter. He said price inflation should be running at between 6 per cent and 8 per cent year on year by the end of March 2018.

The group said it expects to deliver full-year Ebitda “in line with current market expectations and will enter 2018 with optimism and good momentum”.

“Overall, this is a solid set of numbers with robust demand, solid pricing momentum,” said David O’Brien, an analyst with Goodbody Stockbrokers in Dublin, who expects the group to post 11 per cent Ebitda growth next year, following a slight earnings dip in 2017.

During the third quarter the company expanded its footprint in Russia through the acquisition of a corrugated plant in the greater Moscow area, establishing Smurfit Kappa “as the largest international corrugated packaging producer” in the country. The company said that the deal, the financial terms of which were not disclosed, “provides an opportunity for further organic expansion”.

Smurfit Kappa also agreed to buy a high-end display and box business in Greece, which upon completion will extend the group’s access to southeastern Europe.

Mr Bowles indicated that the combined value of both purchases was about €70 million. He added that the company’s pipeline of potential acquisitions was “quite healthy” across regions in which it operates in Europe and the Americas.