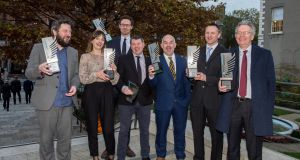 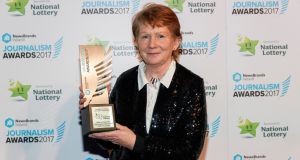 The Irish Times led the way at the 2017 NewsBrands Ireland Journalism awards, with journalists from the newspaper winning seven awards, more than any other title.

In a ceremony in Dublin’s Mansion House that, in duration at least, harked back to the mythical long journalistic lunches of times gone by, Fintan O’Toole was named best columnist (broadsheet) and described as “a writer of outstanding analysis” for his articles on Brexit, Donald Trump’s America and contemporary terrorism.

Patrick Freyne won best critic for the second year in a row for his Ticket columns on TV and popular culture, while Malachy Clerkin received the best sports writer award for his writing on GAA and on the death of Anthony Foley.

David Labanyi, who was the first journalist to uncover the Garda breath test scandal, won the award for Scoop of the Year, and crime correspondent Conor Lally was named best features writer (broadsheet).

The award for digital excellence was won by Ciara Kenny for her work on The Irish Times Abroad project, which provides a platform for news, emigrant stories and discussions for Irish people around the world.

Ruadhán Mac Cormaic received the award for best foreign coverage for his reports on the war in Syria and on the US presidential election.

The overall journalist of the year award was won by Catherine Fegan of the Irish Daily Mail and the Irish Mail on Sunday, while the crime correspondent of the Irish Daily Star, Mick O’Toole, won two awards for his work on the Irish connections of London Bridge attacker Rachid Redouane.

A special award for investigative research was presented to historian Catherine Corless for her work uncovering the existence of hundreds of bodies of infants buried at the old mother and baby home in Tuam, Co Galway.

The chair of the judging panel for the awards, Matt Dempsey, said the standard of the 1,400 entries received was higher than ever before, and that even to get nominated meant “you must be a very talented journalist”.

This year’s awards were sponsored by the National Lottery, whose chief executive, Dermot Griffin, told the audience that a free media was an essential part of a democratic society.

Vincent Crowley, the chair of NewsBrands, the representative body for all national newspapers, print and online, said it was very important that journalism was protected by a legislative framework “that empowers journalists to do their work”. He said he was hopeful that the current review of the 2009 Defamation Act would recommend a fairer regime “in line with our European neighbours”. Mr Crowley also called for the appointment of a dedicated minister for media.

Minister for Communications Denis Naughten said the Government expected to receive the report on defamation law “in the coming months”.

Mr Naughten said he believed politicians had a role to play in the survival of a free press, “despite president Trump’s best efforts to destroy it”. He noted that, despite Mr Trump’s attacks on the New York Times, the newspaper’s share price and digital subscriptions had risen substantially since his inauguration.

Broadsheet Columnist of the Year: Fintan O’Toole – The Irish Times

Front Page: Irish Daily Mirror ‘What Have They Done’

Scoop of the Year: David Labanyi – The Irish Times

Sports Writer of the Year: Malachy Clerkin – The Irish Times