The ‘Late Late Toy Show’ should be a ratings topper again - but how are TV audiences counted?

The way television is viewed is changing, and so is the way it’s measured 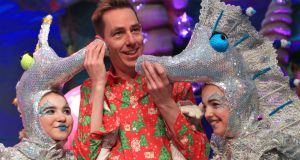 Ryan Tubridy pictured with Seahorses, Jade Ellis and Ebony Darcy (12 and 13) from Carlow at a preview of the ‘Late Late Toy Show’, expected to be the most-watched programme of the year.

The Late Late Toy Show has a surreal knack for making adults – never mind the kids - wide-eyed with excitement and top of this list are the RTÉ executives who know they can count on a sea of viewers to tune in.

Not only was the toy-fest the most-watched television programme in Ireland in 2016, but the last eight toy shows have been the eight most-watched programmes this century.

Last year, the live Friday night broadcast of the show was watched by an average audience of 1,398,000 million people, putting it top of the century pile based on “the overnights”. The show also had an overnight “reach” of 2,001,500 and a whopping audience share of 77 per cent.

The “consolidated” viewership (not including digital streams or the afternoon repeat) later rose to 1,571,600, which put the 2016 Late Late Toy Show second only to the 2014 programme (consolidated average audience of 1,593,500) in the list of most-watched programmes this century.

So, yes, the Late Late Toy Show is incredibly popular. But how are all these television ratings calculated, and what do terms like “average audience”, “the overnights”, “consolidated”, “reach” and “share” all mean?

Batteries are not included in this user guide.

How are all the viewers totted up?

Strictly speaking, they’re not. Television ratings are based on the viewing habits of a representative panel of 1,050 households that have had a small device called a “Peoplemeter” connected to each television set.

The panel is designed to reflect the age, sex, social class and regional breakdown of the television household population – the size and nature of which is separately measured twice a year.

The viewing habits of the people (aged 4-plus) who live in the panel homes (approximately 2,500 people) and any guests are then monitored, with each person assigned a button on a special remote control that they use to log in and out of their viewing.

With a little bit of maths, the national audience for particular television programmes is then extrapolated from this viewer sample. This is the method employed across the world by research firm Nielsen, which holds the contract with Irish industry body TAM Ireland until September 2019.

I used to be ‘Toy Show’ die-hard, but I’ve decided to Netflix it instead tonight. Will the ratings be down a viewer as a result?

Only if you belong to the panel of homes measured by Nielsen. If you don’t, then your choice won’t affect the audience tally either way.

What’s the difference between the average audience, reach and peak audience?

Nielsen measures viewing habits on a minute-by-minute basis. So if someone tunes into the Late Late Toy Show for the opening song-and-dance number, but switches off once the toys take centre stage, it will dent the average audience, but that person will still count towards the programme’s total reach.

Broadcasters sometimes give a “peak” audience figure for a programme. This number can be interesting if it relates to, say, a penalty shoot-out at the end of a football match or the moment the winner of a talent competition is revealed.

What happens if a panel viewer is addicted to ‘Home and Away’, but doesn’t get home from work in time to watch it live. Do they count ?

And if they watch it later that evening, they will be part of the “overnight” audience for the show – this is what’s known as the Live plus Viewed On Same Day As Live (Vosdal) ratings. They become available to broadcasters and other TAM Ireland members on the next working day.

If the time-shifting viewer watches the show back sometime within seven days, this will be added to the consolidated ratings. These have become more important in recent years as more viewers become less tied to television schedules.

It won’t count if a show is consumed in fast-forward mode.

What about the people who watch through streaming players?

Broadcasters know how many people have streamed a programme on their Players – and they have the total tally, rather than one derived from a smaller sample.

But viewing via on-demand services like RTÉ Player is measured separately from the TAM Ireland / Nielsen figures and can’t simply be lumped in with Nielsen’s average audience figure for a total rating. That’s because people often don’t consume the full programme when they hit “play”, or the Player might crash, so a single person can end up generating multiple streams.

The industry is currently hard at work at developing a method of measuring this digital audience in a way that is reliable and comparable to its measurement of traditional television consumption. The jargon here is “integrated” data.

Are broadcasters reading my tweets?

They are definitely measuring hashtag activity, yes. Broadcasters are very keen to track the social media “buzz” with their biggest shows, because they can then use it to prove to advertisers that their viewers aren’t asleep in front of the screen – they are really paying attention. That makes it more likely they’ll be paying attention to the ads too.

Who cares how many people watch a TV show anyway?

Advertisers care. So do the broadcasters – the fewer people actually watch television, the less money they can make.

That’s why “event TV” like tonight’s show is so valuable to RTÉ.

A 30-second ad during the Toy Show had a price tag of €34,000, while advertisers will have paid 25 per cent more to secure the most attractive positions in the commercial breaks – the spots that come before or after viewers head to the kitchen for a festive refill.

1 Fianna Fáil may have just pressed the pause button on the property market
2 UK to prioritise EU trade deal over one with United States
3 Who are Ireland’s 17 billionaires?
4 My father in a nursing home wants to gift me his house
5 Dunnes premature in challenging Point Village resolution move, Supreme Court finds
6 Are there annual limits on inheritances or gifts to a child?
7 Saudi prince’s WhatsApp account ‘directly involved’ in Bezos hack
8 European investor acquires Harcourt Road offices for €55m
9 Belfast regeneration project worth £500m gets green light
10 New blow for Ted Baker as accounting scandal doubles in size
Real news has value SUBSCRIBE