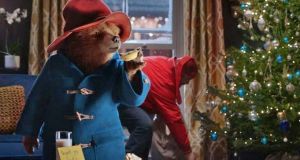 Now that the sparkle has faded from Black Friday’s frenzy of discount desperation, it seems a good time to zoom in on this year’s crop of Christmas ads. Do they have anything different to offer from the now-standard storytelling palette of awestruck children, frazzled parents, personified vegetables and CGI animals with highly complex emotional lives?

Not really, is the answer. It turns out that what is most noticeable is not the creative range of the festive ads on screen, but the odd and in some cases downright hostile ways in which they are being received.

In case you missed it, this everyday tale of complaint-spinning, headline-making advertising came gift-wrapped from Marks & Spencer, a company not previously known for its penchant for swearing or doing anything vaguely risqué in its marketing.

This year, the retailer sensibly shelled out for the rights to make loveable idiot Paddington, accidental foiler of crime and the star of current cinematic delight Paddington 2, the hero of its Christmas campaign.

In the ad, Paddington interrupts a burglar snatching presents, mistaking him for Santa Claus delivering them, and soon helps him see the magic of Christmas, for which the repentant, dewy-eyed burglar says, “Thank you, little bear.”

Alas, it sounded a lot like he was saying “f*** you, little bear”, enough to launch a flurry of crying-with-laughter emojis and the social media hashtag #FuckYouLittleBear, a somewhat surprising alternative to M&S’s more mainstream suggestion #LoveTheBear.

Furthermore, the entire ad has now been redubbed in a series of YouTube parodies laced with the type of impatient expletives that would not go down at all well with Paddington’s Aunt Lucy.

After an unspecified number of complaints from people who were apparently just waiting for M&S to go rogue, the UK’s Advertising Standards Authority was moved to clarify that while some viewers may have “misinterpreted” it, the ad did not technically contain any swearing and “therefore did not break the rules”.

If only all reactions to this year’s Christmas ads were as essentially as comical as this. Unfortunately, the M&S ad, this year’s John Lewis effort and one by Tesco UK have all been attacked by out-and-out racists convinced that their ethnically diverse casting is some kind of precursor to white genocide. Never read the comments on YouTube.

Emboldened by numerous talk radio bores and right-wing columnists insisting there is a “war on Christmas”, despite all evidence to the contrary, some racists have declared they won’t shop at Tesco thanks to its “Everyone’s Welcome” campaign, which dares to include a Muslim family.

It is, of course, a sad state of affairs that an ad’s brief acknowledgement that lots of different people shop at Tesco – at this time of year, just as at any other – should spark a bitter “whitelash”, but there you have it. In Britain’s febrile political atmosphere, the season of goodwill is a target for those who have none.

Elsewhere, Sky Cinema is said to have out-John-Lewised John Lewis with a charming, time-spanning ad in which a mother and daughter watch The Sound of Music together on various occasions over the decades (from the cathode ray tube to the flatscreen years), while the father hovers about with a video camera and sizes up his daughter’s new boyfriend from the hallway.

As the four-strong cast of this ad are white, racists have not found a way to pour bile over it, though I like to imagine Sky has sent them a subtle message of disapproval through its lauding of The Sound of Music, a film that ends with the entire von Trapp family fleeing the Nazis – saying “f*** you” to fascism ultimately proving to be Fraulein Maria’s most favourite thing of all.

Christmas is a time of both high expectations and cosy traditions, which perhaps heightens the grim tetchiness of people who are intolerant and paranoid the rest of the year.

They succumb to the idea (again, contrary to the evidence) that not only are advertisers failing in their duty to preserve their monocultural memories in amber, they are somehow disrespecting those memories. In this climate, advertisers should make it their new year’s resolution to be more, not less, diverse.

The world moves on, even at Christmas. The ad that has most baffled me this year shows a small child – the deadly earnest kind only found in adland – nursing a carrot in McDonald’s and then taking it home “for the reindeer”, only for big brother to mischievously inform her there’s “more than one”. So off hapless dad and humoured child venture to the drive-thru to pick up a bag of carrot sticks, because – as the ad concludes – McDonald’s is “#ReindeerReady”.

I was so confused watching this ad. What is McDonald’s anymore? What is Christmas? Why can’t things stay the same? It turns out that the fast food chain, home of Big Macs and Happy Meals, started selling carrot sticks as far back as 2005 and I’m just hopelessly out of touch. Still, though... enough with all the vegetables now, or else there really will be swearing.