Time Inc to be bought by Meredith and Koch brothers in $2.8bn deal 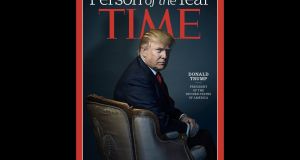 When combined, the Meredith and Time brands will have a readership of 135 million people and paid circulation of nearly 60 million. Photograph: Nadav Kander/AFP/Getty

US media company Meredith Corp said on Sunday it will buy Time Inc, the publisher of People, Sports Illustrated and Fortune magazines, in a $1.84 billion all-cash deal backed by conservative billionaire brothers Charles and David Koch.

The deal is a coup for Meredith, which held unsuccessful talks to buy Time earlier this year and in 2013.

It will give news, business and sports brands to the Des Moines, Iowa-based publisher and broadcaster, which owns lifestyle magazines such as Better Homes & Gardens and Family Circle. Analysts have said that bulking up on publishing assets could give Meredith the scale required to spin off its broadcasting arm into a standalone company.

When combined, the Meredith and Time brands will have a readership of 135 million people and paid circulation of nearly 60 million. The deal also will expand Meredith’s reach with internet-savvy millenials, creating a digital media business with 170 million monthly unique visitors in the United States and more than 10 billion annual video views.

The Koch brothers are two of the world’s richest men through their ownership of Koch Industries, a sprawling industrial empire that manufactures such products as Brawny paper towels, Dixie Cups and Lycra.

Koch Equity Development, the private equity arm of the Koch brothers, agreed to offer Meredith $650 million in preferred equity to fund the Time acquisition. The companies said the Koch unit will not have a seat on Meredith’s board and will have no influence on Meredith’s editorial or managerial operations.

The Kochs, known for their advocacy of conservative policies and influence on some quarters of the Republican Party, had previously expressed interest in buying media properties such as the Los Angeles Times and the Chicago Tribune in 2013.

Their involvement in the Time deal “underscores a strong belief in Meredith’s strength as a business operator, its strategies, and its ability to unlock significant value from the Time acquisition,” according to the companies’ statement announcing the deal.

Meredith said it expected the deal to close in the first three months of 2018. Reuters reported earlier on Sunday that the companies were nearing an agreement.

Including debt, the deal values Time at $2.8 billion (€2.34 billion). Meredith said it anticipated cost savings achieved by eliminating overlap in the two companies of $400 million to $500 million in the first full two years of operation. Meredith added it would launch a tender to acquire Time shares for $18.50 in cash.

“We are adding the rich content-creation capabilities of some of the media industry’s strongest national brands to a powerful local television business that is generating record earnings, offering advertisers and marketers unparalleled reach to American adults,” Meredith chief executive Stephen Lacy said in the statement.

Time Warner Inc spun off Time, which also publishes the eponymous current affairs magazine, as a standalone company in June 2014. Since then, New York-based Time had struggled in an industry-wide decline in print media, as circulation shrinks and advertisers shift to digital platforms.

Meredith, which has a capitalisation of $2.7 billion, tried to merge with Richmond, Virginia-based broadcaster Media General in 2015, but Nexstar Media Group Inc ended up acquiring that company for $4.6 billion.

Time shares ended trading on Friday at $16.90, giving the company a market capitalisation of $1.7 billion.

Time, led by chief executive Rich Battista, has been undergoing a strategic plan that includes revamping its cost structure and focusing on its digital business. It has also been exploring a sale of several magazines titles, such as Coastal Living, Sunset and Golf and a majority stake in Essence as well as Time Inc UK.

The assets it had earmarked for a potential sale represented about $488 million in revenue for the year ended June 30th, the company has said.

In September, it named its former digital editor, Edward Felsenthal, to be the new editor in chief of Time. It has also expanded into streaming video channels, launching Sports Illustrated TV through Amazon earlier this month.

Time said earlier in November that in the third quarter, its total revenue slipped 9.5 per cent to $679 million. It marked the sixth straight quarter the company had missed expectations for revenue.

Battista, who will leave Time when the deal with Meredith closes, will work closely with the Meredith management team to ensure a smooth transition, the companies said on Sunday.

The magazine industry has been consolidating for several years. Men’s Health magazine publisher Rodale said it would sell itself to larger rival Hearst last month. Wenner Media, the owner of Rolling Stone, said in September it was exploring a sale of the music magazine.

1 How can I view my dead brother’s will if I’m not the executor?
2 Michel Barnier rejects UK’s call for Canada-style trade deal
3 Applications for 961 new homes in Dublin and Meath rejected
4 Aqua Dome in Tralee could close over insurance claims, directors warn
5 Barry’s Hotel at €8m comes with potential to double in size
6 Provisional liquidator appointed to Dublin engineering firm
7 Bursting of Tesla bubble a case of ‘not if, but when’
8 Facebook faces tax court trial in US over Irish offshore deal
9 Mount Charles wins €10m catering contract at Maynooth University
10 Investors pile into property as turnover in build-to-rent sector reaches €2.54bn
Real news has value SUBSCRIBE