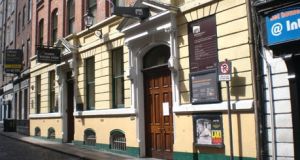 The IFI reported incoming revenues of €3.45 million versus €3.14 million a year earlier

The Irish Film Institute (IFI) has warned it is struggling to deal with rising costs after slipping back into the red again, having returned to profit in 2015.

The Temple Bar-based centre, which recorded a €15,000 deficit in 2016, said there has been no increase in funding to allow for significant rises in core costs over the last eight years.

It costs the IFI approximately €3.5 million to run the centre each year, of which 23 per cent of financing is provided via a €801,500 grant from the Arts Council.

Approximately €1.23 million in income is derived from programming activities with a further €1.7 million coming from voluntary income, which comprises largely of grants.

“Overall there have been several areas where costs have increased including film distributors terms which have reduced net income, and increased costs of festivals and special events,” directors’ said in a note attached to recently filed accounts.

Directors also said the establishment of its digital archive had given rise to annual maintenance and licensing costs, while bad debts had incurred due to the liquidation of its DVD distributor or its Cinemobile.

“None of these core cost increases have as of yet been funded by government agencies,” the directors’ said.

In addition, the directors added that as the IFI operates from a heritage building, it is faced with “unique challenges” in terms of insurance, repairs, maintenance and security.

The centre earlier this year secured a capital grant from the Department of Arts of €149,801 to allow it to proceed with essential works to the roof and cinemas at the Eustace Street premises.

“The IFI continually explores ways to maximise its own income generation; however there is limited scope to do this,” the centre’s directors said.

1 Knock gets visit from world’s largest passenger plane
2 Why Sweden ditched its negative rate experiment
3 A maverick taking on the Irish whiskey establishment
4 Will Avolon find itself on the block as China prepares to seize troubled parent HNA?
5 Dr Pepper owner in talks to take over former Lidl distribution centre
6 Barclays scraps system monitoring how long staff spent at desks
7 Kingspan amasses €750m war chest to fund acquisitions
8 How can I view my dead brother’s will if I’m not the executor?
9 Flyefit plots fundraising to double gym to 35
10 Review: prepare to flip over Samsung’s new folding phone
Real news has value SUBSCRIBE

Rio Tinto looks to diversify board with addition of more women 18:09
Profits rise at tractor-maker Deere on easing of US-China trade dispute 17:23
Will Avolon find itself on the block as China prepares to seize troubled parent HNA? 17:05
Why Sweden ditched its negative rate experiment 16:08
UK business activity grows at steady pace in February 16:08
Search executive
jobs on irishtimes.com