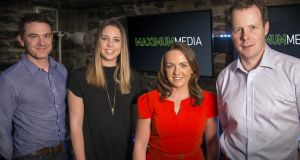 Maximum Media has appointed Maria Scannell as its new chief commercial officer, replacing Daragh Byrne who was promoted to chief executive in October.

Ms Scannell joins the Irish-owned media group from Digicel, where she was head of its Trend Media Pacific group and oversaw a team of 45 staff across commercial production, digital publishing, media sales and marketing.

“As Brexit looms and with so much change driven by technology companies, there has never been a more interesting time to return to Ireland’s media industry,” Ms Scannell said.

The company behind the JOE, SportsJOE, Her and HerFamily brands will invest “heavily” in its commercial department in 2018, she added.

Maximum, founded by Niall McGarry, said Ms Scannell would work alongside Mr Byrne and managing director John Burns to lead the expansion of the company in Ireland.

The group, which also has an operation in the UK, has also appointed Ali Donnelly as general manager. Ms Donnelly, who previously worked for Maximum in 2012, returns to the company after a period at the agency Vizeum.

Maximum has spent 2017 reinventing itself from a website publisher into a “digital broadcaster” with a series of Facebook Live video shows and podcasts.

The company made a profit of €466,000 in the year to the end of April 2016, its most recent accounts show. Most of its revenues comes from branded content, sometimes known as native advertising, and other media partnerships.