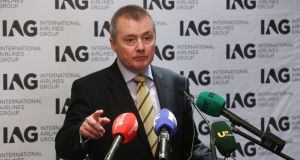 IAG chief executive Willie Walsh: “There are lots of pilots in the market – there aren’t many who have the qualifications to fly as a captain.” Photograph: Niall Carson/PA Wire

The chief executive of the International Airlines Group (IAG), Willie Walsh, said there is no shortage of pilots in the airline industry, despite recent troubles with flight cancellations at Ryanair.

Speaking at the Shannon Chamber of Commerce’s president’s lunch at Dromoland Castle, Mr Walsh referred to Ryanair’s recent flight cancellation troubles and said “the bigger problem that Ryanair faced was a shortage of people with sufficient experience to be promoted to captain”.

He said: “There are lots of pilots in the market – there aren’t many who have the qualifications to fly as a captain.” As reported earlier this month in The Irish Times, Mr Walsh said Aer Lingus had recently received 3,000 applications for 100 pilot jobs.

In relation to what had happened to Ryanair, Mr Walsh said: “I wouldn’t wish it on anybody.”

He said: “Michael O’Leary is an incredible competitor, very aggressive. If anyone could fix it, he would fix it and he has done that.”

Mr Walsh added: “I don’t buy into the belief that this was something structural. It was just a blip. Ryanair has fixed it and has moved on and they will be as strong as ever. Personally, I don’t take any pleasure out of seeing someone else go through some difficulty and we wish Michael O’Leary well.”

Under Mr Walsh’s leadership, IAG has increased its workforce from 57,000 employees in 2011 to 63,000 employees today but Mr Walsh said that IAG doesn’t have a human resources (HR) department.

He said: “It is something I do slightly differently – I refuse to have a HR department.”

He told the packed audience that “outsourcing your management of people to a HR department is wrong”.

He said: “We all have a responsibility to the people that we work with and for . . . It is fascinating to see how an organisation tries to create one and comes up with innovative names and as soon as spot them I get rid of them.”

Mr Walsh also said: “My ambition for Aer Lingus is unlimited because until we discover we have gone everywhere we can and there is nowhere left go to, I think there is huge opportunity for the company.”

Today with the recently announced Dublin-Seattle route, Aer Lingus operates 13 routes to the United States from Ireland, compared with six when IAG purchased the company in 2015.

Mr Walsh said the process to purchase the “trophy asset” Aer Lingus was “tortuous”: “It bemused my colleagues in London when they would read about the questions we were being asked and the challenges that were being levelled against us.

“We bought it because we wanted to grow it and we have already exceeded all of the commitments we gave.

“We wanted to purchase Aer Lingus because of its transatlantic network. We saw great opportunity there.”

Mr Walsh said the airline is to take delivery of eight new 180-seat Airbus A321LR aircraft in 2019 for its transatlantic network, which he believes will be a “potential game-changer” for the airline.

“I could see us operating with 20 of these aircraft in due course,” he said. “We are fully committed to exploiting the opportunities we saw when we purchased Aer Lingus.”

He said the company had already identified 10 potential new cities to fly to in the US.

Mr Walsh pointed out that the demand from the population around the greater Dublin area alone could not sustain the new service to Seattle.

“There is no way that Aer Lingus would be able to fly to Seattle if it didn’t have customers flying from Europe and the UK into Dublin to connect.”

He said that there is no way there would be the sufficient demand in the local market around Dublin “to sustain a route for a destination like Seattle or indeed to Miami, or to Los Angeles, or Philadelphia, or to San Francisco.”