A new adventure for public service broadcasting? No, just a repeat 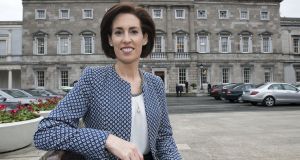 Fine Gael TD Hildegarde Naughton, who chairs the Oireachtas communications committee. Will its recommendations be turned into action, or left on pause? Photograph: Dave Meehan

Amid more urgent political drama, no one was paying much attention to Tuesday’s publication of the Oireachtas communications committee’s report on the future funding of public service broadcasting. But even if they had switched on, they might well have mistaken it for a repeat.

This is not the fault of the Oireachtas committee, chaired by Hildegarde Naughton, which crafted a logical report containing recommendations that have the potential to be both effective and wildly unpopular.

No one who is currently liable to pay a television licence fee but manages to avoid doing so will be enthusiastic about the thought of the Revenue Commissioners hunting them down, while the latest resurfacing of the rapidly ageing proposal to break the link between payment eligibility and ownership of a television set will have others hiding behind their sofas in horror.

Successive governments have been so adept at commissioning reports on the question of public service broadcasting in recent years that the resulting documents are starting to resemble much-rewritten scripts for a film that is never made.

An Oireachtas committee obviously carries more political weight than some random bank of consultants. But as far as bona fide action is concerned, Minister for Communications Denis Naughten, who asked the committee to prepare this report, wasn’t creating a single hostage to fortune this week.

Observing that the report spanned more than 300 pages, the Minister promised to “examine its contents and recommendations in detail” so that it can “help inform future policy options”. He also said he intended to bring proposals to Cabinet on funding options for RTÉ and TG4 “early in the new year”.

The tradition of political stasis on this issue, combined with the possibility of a general election, pushes this statement into the category of believe-it-when-you-see-it.