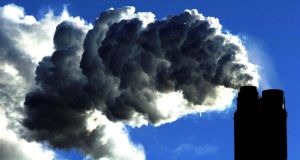 Carbon footprint: it is becoming more frequent for investors in any firm to ask about its carbon emissions. Photograph: John Giles/PA Wire

CDP, the organisation that measures the environmental impact of firms across the globe, threw the proverbial cat among the pigeons this week by naming and shaming Irish companies that had failed to disclose their carbon footprints.

The group’s report – funded by some big name investors like BlackRock and Goldman Sachs – used simply to salute firms that were endeavouring to tackle the issue of climate change, in Ireland’s case, that means Kingspan.

However, more recently it has taken to highlighting those who don’t seem to be taking it seriously. And so this year it gave an “F mark” for non-disclosure of their carbon emissions to 27 Irish plcs.

The reaction of some of those listed in an article in The Irish Times ranged from irritation to obfuscation to silence.

Kenmare Resources, which perhaps had the most legitimate grievance, complained that it did publish its annual emissions in its annual report and therefore shouldn’t be lumped in with companies that failed to disclose.

Ryanair also reacted angrily, noting it published its 2016 emissions to the Environmental Protection Agency as required by law and that it was investing billions of dollars in new aircraft with aerodynamic improvements which would reduce fuel consumption by up to 18 per cent.

Several other companies named in the report insisted, when contacted, that they had emissions-curbing policies in place or declined to comment. In one case, a company claimed it would be too costly too compile.

In response to the disquiet caused by its report, CDP said it had given adequate time and notice to the firms involved and that it was entitled to list those who failed to play ball with its survey.

Regardless of the rights and wrongs of shaming companies in this way, it seems inevitable that high-profile entities will soon not be able to avoid publishing such data, not necessarily because the public want it, but because investors are increasingly seeking it.