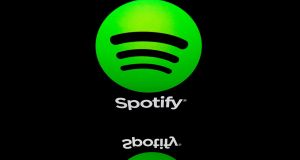 Spotify said it was forced to “artificially” increase monthly subscriptions for its premium service via the Apple app store Photograph: Getty Images

Apple should be investigated by the European Union’s antitrust agency over how it allegedly squeezes rival music streaming services, according to Spotify.

The suggestion will surely escalate a row over how Apple takes a cut of all sales on its app store. The iPhone maker has created an “untenable” situation by imposing ever-changing rules and a 30 per cent tax for apps that compete with Apple Music, said Spotify on Wednesday. The Stockholm-based company said it has filed a complaint with the European Commission on March 11th.

“Once Apple became a platform provider, but also a direct competitor, their incentive to disadvantage rival services, like Spotify, became even greater and their restrictions started to become more frequent and extreme,” said Horacio Gutierrez, Spotify’s general counsel in Brussels.

The antitrust complaint adds to a growing backlash against the tolls Apple and Google charge to developers using their app stores. EU regulators are also concerned about how technology platforms control the online ecosystem and may rig the game to their own advantage. Amazon’s potential use of data on rival sellers is being investigated by the EU to check if the retailer uses that edge to start selling similar own-brand products.

Spotify said it was forced to “artificially” increase monthly subscriptions for its premium service via the Apple app store. Apple Music costs €9.99 a month, the price Spotify charges for direct subscriptions to its own website and used to charge on the app store before Apple imposed its own payment system and extra levy.

While Spotify is available for free via Apple, upgrading to its Premium tier service can now only be done via the internet.

The Brussels-based EU regulator confirmed it received the complaint, which it is now assessing.

Apple is part of an app economy that will grow from $82 billion (€72.4 billion) last year to $157 billion in 2022, according to App Annie projections. App sales are becoming an important source of revenue growth for Apple, especially as iPhone sales decline.

Apple’s power as a platform hasn’t yet triggered antitrust concerns in Europe, EU Competition Commissioner Margrethe Vestager told reporters in Austin, Texas on March 10th, before the complaint became public. “The way they charge in the app store could be a concern but then they would have to be dominant first,” she said, pointing to Google’s Android as the main player for phone systems in Europe. “In some markets they are very very successful in Europe, but not in all European markets.”

Spotify began emailing customers in 2015 that they should cancel subscriptions purchased through Apple’s app store. Netflix and video game makers Epic Games and Valve have also tried to bypass the app stores. The US Supreme Court heard arguments in November from a group of iPhone owners trying to sue Apple for creating a monopoly with the App Store and driving up app prices.

Spotify chief executive Daniel Ek said in a blog post the complaint asks the commission to focus on three main areas: allowing apps to compete fairly, allow consumers to use other payment systems and not be “locked-in” to Apple’s system and stop app stores from imposing unfair limits on marketing and promotions and controlling the communication with users.

The decade-long relationship between the two companies started in 2009, when the Spotify launched on the App Store. Apple in 2011 started imposing the 30 per cent fee and its own billing system, said Spotify, adding that it was at the same time blocked from showing customers other ways to pay or how to upgrade from its free to its Premium service.

Spotify argued that in 2016 it started facing first threats by Apple that its app would be removed unless it complied with the rules. Spotify said it’s blocked from adding any promotions, discounts or even links to external pages with product information. Its app has been rejected several times since or had upgrades and improvements to the app blocked for months.

“We’ve consistently worked hard to play by the rules, even though we can never be sure when they will change, or how,” said Mr Gutierrez. – Bloomberg