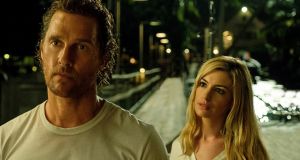 With popular streaming services such as Netflix pouring outrageous sums of money into original movies – albeit with mixed success – it is hardly surprising that Sky might also want a piece of the action.

However, as the broadcaster already offers Sky Cinema subscribers a brand new movie premiere every day, more than 1,000 films on demand and a promise of more blockbusters closer to the theatrical release than anyone else, you’d be forgiven for wondering why.

It’s a risky move when almost every major technology company as well as more traditional media players are clambering to secure as much original content as possible.

As Sky Cinema’s leading man, Ian Lewis, is the first to admit, selecting a movie which has already won plaudits and done well on the big screen is considerably easier than backing one that is little more than a script.

“If you’re going to buy a film after it has already been released in the cinema, or has gotten positive reviews, it is a piece of piss,” he says. “It is just a question of how much money you are prepared to pay for it.”

Lewis should know. As group director of Sky Cinema, the Welshman has responsibility for the broadcaster’s movie subscription service across multiple markets, including Ireland. Prior to his recent promotion shortly before the rebrand from Sky Movies to Sky Cinema, Lewis was in charge of acquisitions at the broadcaster.

Sky Cinema confirmed plans to acquire exclusive rights to new films and to commission a number of original movie productions earlier this year. These films are available to customers for free as part of their subscription on the same day they get a theatrical release.

Among the movies that are coming customers’ way is Serenity, a much-anticipated neo-noir thriller with a cast led by Matthew McConaughey and Anne Hathaway. Others getting a release soon include Life Itself, a romantic comedy-drama starring Olivia Wilde, Oscar Isaacs and Mandy Patinkin, and a star-turn from Zac Efron as serial killer Ted Bundy in Extremely Wicked, Shockingly Evil and Vile.

Final Score, a movie described as “Die Hard in a football stadium”, and starring Pierce Brosnan, arrived in cinemas and on Sky Cinema last week.

“The earlier you get involved in a film the bigger the risk because not all great scripts end up as great films,” says Lewis. “However, the longer you leave getting involved in a production, the more likely you lose out because your competitors will have got there. If they haven’t, then that is because it probably isn’t good enough to attract buyers.”

Lewis admits that neither he nor anyone else can always predict what will or won’t be a hit.

“Film-making is alchemy,” he says. “Slumdog Millionaire is a great example of a film that didn’t look as though it would be a hit and it was. The same goes for The King’s Speech. Every now and then you get a movie that completely defies expectations.”

Lewis has said Sky expects to release five films this year with up to seven next year.

“Over time it is likely that we’ll have more films, but it is a case of quality rather than quantity. We see ourselves as the premium movies service in the markets in which we operate and we don’t want to do anything that dilutes that,” he says.

Lewis stresses that, as with the original productions it is now backing, the broadcaster already engages in a large degree of risk-taking when it comes to buying movies.

“The deals we agree with the big Hollywood studios involve a certain amount of spread-betting and often we’re investing in movies that haven’t yet been made. We commit to buy all the cinema releases in the UK and Ireland from particular studios over a number of years and, in doing this, we are betting on their ability to keep producing great movies,” he says.

“Sometimes you know ahead of time that future blockbusters are on the way. So, for example, the last time we did a deal with Warner Bros, we knew they were just starting on the follow-up franchise to Harry Potter and that we’d be getting three Fantastic Beast movies. Then we learned they were actually making five films in the series so that was a particularly big win for us.

“Equally, though, we know that not everything that comes out of the studios will be a success but we’re buying them as well,” Lewis adds.

Sky wasn’t the first to introduce same-day cinema releases for home viewers. Curzon got there three years ago when it released 45 Years on its (pay-to-play) on-demand service and has continued to bring out new arthouse movies to film fans. Lewis says that Sky’s competitors are, well, pretty much everyone.

“Anyone who provides a way of watching a movie at home is the competition. Whether that is terrestrial channels, subscription services or companies allowing illegal downloads,” he says.

While Sky’s plan has gone down well so far with home viewers, it has got a frosty reception elsewhere, with cinema chains Cineworld, Odeon and Vue – which between them operate more than 60 per cent of British cinema screens – all refusing to show the films.

Other players have taken a different approach to Sky. Amazon, which has backed a number of big movies in recent years, including the Oscar-winner Manchester By the Sea, has gone with a cinema-first policy. Netflix, meanwhile, has put almost all its releases direct onto its streaming service, although there are rumours it is considering a theatrical-first policy in some instances.

Lewis says that part of the reason why Sky is getting involved in producing original content is that some genres that are popular with its subscribers don’t get as much of a look-in as they once did.

“A lot of the big studios are focused on franchises and there are fewer comedy action films or smart thrillers being made. These all do well for us, as does animation. The problem with the last is that we have big deals with Disney, Pixar, Dreamworks and Illumination, but there just aren’t enough animated films coming out.

“Our audience would probably like a new one a week but the turnaround for such movies is typically four to five years,” he says.

The first Sky Original movie to land was Monster Family, an animated feature with a star cast that includes Emily Watson and Jason Isaacs. The movie bombed at the box office and was largely hated by critics on its release in March. But Lewis says it has proven a smash with Sky subscribers, becoming one of the top 15 most popular films in its catalogue over the last decade.

“Monster Family opened on what was a weekend in which the UK and Ireland experienced the worst snow in years. We had 137 cinemas booked out for its opening and at least 20 of those were closed on the day it went on release. However, anyone who wanted to watch that movie could still see it at home with Sky Cinema,” says Lewis.

The Welshman says there are plenty of subscribers who still want to see movies on the big screen but that they also want the option to watch them at home as well. Sky, he says, is out to cater to everyone.

The broadcaster may have a new owner shortly, but Lewis stresses it isn’t the only media company facing upheaval. This is especially true of movie studios, he says.

“I can’t remember a period where there has been so much speculation about every single one of the big studios at the same time,” says Lewis. “It is a very exciting time to be in the market and, if things get shaken up, that can only be good for customers.”