Studio is best known The Breadwinner, Song of the Sea and The Secret of Kells films 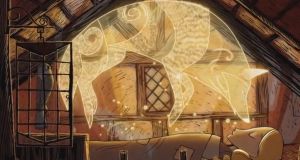 A scene from Wolfwalkers, which tells the story of a young apprentice hunter who comes to Ireland with her father to wipe out the last pack of wolves.

Irish animation studio Cartoon Saloon has confirmed a deal with Apple that sees the technology giant buying a new animated film it is making called Wolfwalkers.

The move come as the iPhone-maker looks to move into backing original new content. Apple is believed to be investing as much a $1 billion in content as it prepares to go head-to-head with streaming services such as Netflix and Amazon, as well as major film studios. It also comes as profits from movies and TV shows bought or rented through the company’s iTunes service continue to decline.

Bloomberg reported in June that Apple was in negotiations with the Kilkenny-based company over the film, which will reportedly star Sean Bean. Cartoon Studio founder Thom Moore confirmed a deal had been agreed in a tweet sent on Monday.

According to IMDB, Wolfwalkers, which is scheduled for release in either 2020 or 2021, tells the story of a young apprentice hunter called Robyn who comes to Ireland with her father to wipe out the last pack of wolves. However, her life changes though after she saves a native girl, Mebh, which leads to her discovery of the Wolfwalkers and transforms her into the very thing her father is tasked to destroy.

Cartoon Saloon is best known for its Oscar-nominated animated film The Breadwinner, which was produced by Angelina Jolie. Other animated films developed by the studio include The Secret of Kells and Song of the Sea, both of which were also shortlisted for Academy Awards.

In addition, the studio’s Emmy-nominated preschool series, Puffin Rock, is streamed globally on Netflix in more than 25 languages. On Tencent’s streaming service, it is close to 100 million views in China.

The company is working on a television co-production with Disney called VikingSkool. The series is scheduled to air next year.

Apple, which is reportedly set to unveil its own streaming platform, has acquired a documentary called The Elephant Queen and is also backing an original animated show called Central Park, about a family of caretakers who live and work in the eponymous park.