Musicians could soon force Google to pay for content 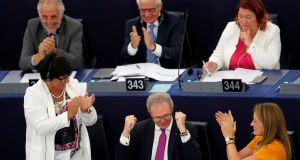 The EU Parliament rapporteur on copyright, Axel Voss, celebrates after a vote on modifications to EU copyright reforms during a voting session at the European Parliament in Strasbourg. Photograph: Vincent Kessler/Reuters

The European Parliament has endorsed Commission proposals to reform copyright rules for the digital age following a massive lobbying campaign that saw a face-off between the internet industry and and news and music publishers.

The aim of the proposed legislation is to force Google, Facebook and other tech giants to share revenues more fairly with Europe’s creative industries.

But Siada El Ramly, director general he trade association representing online platforms,said after the vote that MEPs had decided to “support the filtering of the internet to the benefit of big businesses in the music and publishing industries despite huge public outcry”.

“We hope that governments of the EU will hear their citizens’ concerns in the next stage of negotiations”.

MEPs were voting vote on a series of amendments to a proposed Commission package of reforms intended to update EU copyright rules for the digital age and for first time since 2001. A majority of the lawmakers had, in July, rejected the tough approach proposed by a key committee tasked by the Parliament to look into the issue.

The purpose of the proposals is to facilitate content producers like newspapers or musicians in forcing online platforms to pay licensing agreements for their use of what is copyright material.

The overhaul of the copyright directive was first proposed by the commission in 2016.

After prolonged debate in the European Parliament, its rapporteur for the reform, Axel Voss, had tabled key amendments to the publisher’s “neighbouring right” on hyperlinks – also known as the “link tax” – and to strengthen the position of journalists.

The link tax would require online platforms like Google and Facebook to pay media companies when linking to their articles.

The other most contentious elements of the draft legislation, article 13, would require the use of “upload filters” to pre-scan user uploaded content to ensure it did not breach copyright rules. Critics say this would hamper internet freedom and kill off content such as social media memes.

The system envisaged is comparable to YouTube’s Content ID, an automated system that checks videos for copyright material like songs and blocks anything that hasn’t been licensed. It is feared it would block legitimate material by accident and that its cost would stop smaller platforms from getting their foot in the door.

Supporters of the measures say the dangers are being exaggerated and that the legislation simply gives small players a way to reclaim the value of their work .

Mr Vos said journalists ought to get a share of publishers’ remuneration. He said that hyperlinking is and will be allowed under the new rules and added that sharing facts was not a problem. He said he was taking out reference to anything that could be interpreted as a requirement for upload filters.

Following Wednesday’s vote – in which 438 voted in favour and 226 against, with 39 abstentions – the legislation returns to be negotiated between MEPs and member states in the so-called “trilogue” process. Only if agreed will it become a directive that member states will be required to transpose domestically.

The Society of Authors says the legislation is primarily about delivering fair pay to content creators. It noted that amendments proposed to the legislation (such as the safeguarding of parody content and memes as an exception to copyright claims) would neutralise critics’ most alarmist claims.

“We need a publishers’ right to protect the hundreds of thousands of jobs in Europe’s news media sector and, in particular, to protect the future of professional journalism and its role in facilitating the democratic debate,” Wout van Wijk, executive director at News Media Europe, said.