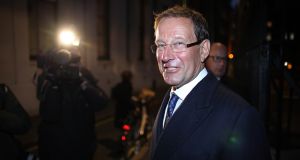 Independent Star, the company that publishes the Irish Daily Star, made a net profit of €1.5 million in 2017, down 15 per cent on the previous year, accounts filed to the Companies Office show.

The company is 50 per cent owned by Independent News & Media (INM), which operates the title. The other half is currently owned by Richard Desmond’s Northern & Shell but is set to be acquired by Irish Daily Mirror publishing group Reach.

The Competition and Consumer Protection Commission (CCPC) this week approved the transaction subject to a binding commitment by Reach to prevent the transfer of competitively sensitive information between its business and Independent Star and between Reach and INM.

The Irish Daily Star deal, which is part of a wider £127 million (€144 million) acquisition by Reach of Northern & Shell’s publishing assets, will get the regulatory go-ahead if Minister for Communications Denis Naughten rules that it does not compromise media plurality.

“The circulation of newspapers continues to decline,” Independent Star states in the directors’ report accompanying the accounts.

“The company has fully implemented a cost-cutting programme, which was put in place due to reduced revenues as a result of the declining print market, in order to maintain positive financial performance.”

INM provided printing distribution services to a value of almost €4.5 million during the year, down from €5.5 million, while Northern & Shell provided news and content to a value of €400,000, the same as in 2016.