Waterford-based Immersive VR Education were commissioned by BBC for project 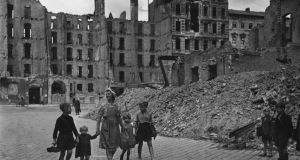 A ruined Berlin in 1945. An Irish company has been honoured for its VR film on a bombing raid in the second World War. Photograph: Fred Ramage/Keystone Features/Getty Images

An Irish company’s virtual reality recreation of a British bombing raid in the second World War on German capital Berlin featured in the Venice Film Festival awards at the weekend.

Waterford-based Immersive VR Education worked on a project retracing the journey of BBC war correspondent, Wynford Vaughan-Thomas, in the belly of a Lancaster bomber on a raid over Berlin in 1943.

The title was one of just 28 to be nominated for the virtual reality film award - linear category at the Venice Film Festival awards ceremony over the weekend.

Immersive VR Education chief executive, David Whelan, said that the company never expected that the project would reach the awards.

“But we will take this recognition from our esteemed industry peers and we will use it to further our vision for our company,” he said.