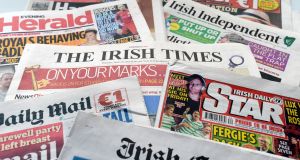 Reach, publisher of the Irish Daily Mirror, is buying 50% of the ‘Irish Daily Star’. The other half is owned by ‘Irish Independent’ publisher INM. Photograph: Alan Betson / The Irish Times

Reach, the British newspaper publisher formerly known as Trinity Mirror, has been cleared to buy 50 per cent of the company behind the Irish Daily Star by the competition watchdog.

These include an undertaking by Reach that the directors it appoints to serve on the board of Independent Star will have no responsibility for the day-to-day running of any other Reach newspaper business active in the State.

Reach has picked up the 50 per cent of Independent Star Limited owned by Richard Desmond’s Northern & Shell as part of its wider £127 million (€144 million) acquisition of the Express and Star newspapers and OK! magazine from N&S. This deal has already been approved by competition regulators in the UK.

The other 50 per cent of Independent Star is owned by Independent News & Media (INM), which operates the title.

The CCPC cleared the passing of Northern & Shell’s interests in the Republic to Reach after a two-phase investigation, which began when it was notified of the deal in February this year. The agreement will also see N&S’s distribution company in the Republic transfer to Reach.

The CCPC had identified “a potential competition concern” in relation to the exchange of competitively sensitive information between Reach, INM and the joint venture Independent Star, which it believed could constitute a breach of competition law.

To address its concerns, Reach submitted proposals that would prevent the direct or indirect exchange of competitively sensitive information.

The company agreed that no Reach-appointed directors would discuss with or pass on to Independent Star or INM any competitively sensitive information relating to Reach’s other interests.

It also agreed that neither Reach nor Reach-appointed personnel should discuss with or solicit any such information from INM.

“ The CCPC has concluded that these commitments, which were taken into account as part of its determination, are appropriate and effective in addressing its competition concerns,” it said.

The transaction still needs clearance here from Minister for Communications Denis Naughten, who will assess its impact on media plurality.

Reach, a listed company on the London Stock Exchange led by chief executive Simon Fox, is preparing to cut jobs across the group as it seeks to pool resources between its titles following the merger. It has previously indicated a desire to reduce costs by £20 million (€22.4 million) by 2020.

In the Irish market, Reach publishes the Irish Daily Mirror, the Sunday Mirror and the Sunday People, while it also owns RSVP magazine and the websites dublinlive.ie and rsvplive.ie.

The company slumped to a loss of £113.5 million (€127 million) in the first half of 2018 after recording an impairment charge on its regional titles in the UK.