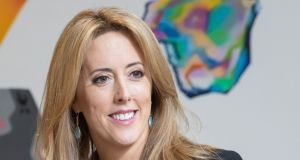 Désirée Finnegan, Screen Ireland chief executive: “When the pandemic hit, we had to stop and reconfigure everything that we were doing.”

Désirée Finnegan was seven months into her role as chief executive of Screen Ireland when every Irish cinema shut down and every mid-shoot film and television drama was obliged to press pause.

The speed at which the crisis unfolded was worthy of Hollywood’s finest, but Finnegan hasn’t dwelled on the close-to-home analogy. “It’s been such a new experience for everybody,” she says.

Still, six weeks after she presented Screen Ireland’s 2020 slate at a Dublin art gallery packed with industry luminaries, her plans were subject to a major rewrite.

“When the pandemic hit, we had to stop and reconfigure everything that we were doing,” Finnegan says. This meant devising 12 separate measures with a total cost of €5 million to alleviate the pain of Covid-19 on the Republic’s devastated screen sector. Although the money is necessarily finite, its response has won plaudits.

The most eye-catching move was a widening of a new €1 million slate funding scheme (to help Irish companies develop a slate of projects in-house) to €3.2 million, with 26 production companies on track to receive funds of up to €200,000 to pursue the early stages of intellectual property. “It was about redirecting our focus to development, as production had come to a standstill,” she says.

Screen Ireland has also stepped up its direct supports for creatives, with some 150 directors applying to a new fund aimed at boosting their “early creative leadership” and 300 actors applying for an “actor as creator” programme run in partnership with the Bow Street Academy. It also bumped up its investment in two screenwriter schemes, while training agency Screen Skills Ireland, for which it has responsibility, transferred its much-subscribed courses online.

Now the Government go-ahead is there for production to restart, the plot twist is that this is easier said than done. Screen Ireland has a €1 million fund to cover the higher costs – estimated to range between 7 and 20 per cent – of socially distanced filming on its projects, which might require longer shooting schedules, on-set “pods” and quarantine facilities for cast and crew. But the unavailability of insurance to cover any future shutdowns is “one of the biggest issues”, she says.

Unless there’s a fix – and in other European countries, governments have stepped in to underwrite potential losses – then it’s likely only the best-resourced projects, such as the Apple TV+ series Foundation at Limerick’s Troy Studios and Netflix’s Vikings: Valhalla at Wicklow’s Ashford Studios, will get back up and running.

“We have been working really closely with the department on the recovery,” Finnegan says diplomatically, referring to what is in the process of becoming the Department of Media, Tourism, Arts, Culture, Sport and the Gaeltacht.

Screen Ireland’s new Covid-19 schemes are not funded by extra money, but by a reallocation of funds that would have been awarded to postponed or scratched productions. The agency’s capital budget for 2020 remains at €17.2 million, below its pre-recession peak, in an era of unprecedented opportunity.

Finnegan is now entering pre-budget submission season conscious that there are competing demands on the 2021 purse, but also that the new Government has reiterated the old one’s commitment to double employment in the sector.

“We are currently preparing to address a significant backlog of production that should have taken place in 2020, so we’re going to need funding to address that,” she says, declining to put a figure on it.

Specific measures she would like to see include a raising of the expenditure cap under the Section 481 tax credit, which would allow the Republic to attract higher-budget international productions.

The need for both a more competitive tax edge and expanded studio capacity resurfaced in Los Angeles during last September’s trade mission, which also saw Leo Varadkar tell a starry gathering at the Beverly Wilshire hotel that he had “an open ear” for industry requests. Finnegan says relationships with studios, networks and streaming companies were strengthened as a result of the mission. “It showed us how well-regarded Ireland is.”

Indeed, it was her own perception of the Irish sector’s “just stunning” track record that lured the Dubliner back home to succeed James Hickey at Screen Ireland after 15 years as a marketing executive at Warner Bros Pictures, which she had joined in 2004 after a spell at Enterprise Ireland’s New York office.

At Warner Bros, Finnegan had been leading a London-based team as senior vice-president of marketing and publicity for Europe, the Middle East and Africa, while before that she had been based at the studio’s headquarters in Burbank, California, where she had strategic oversight of international publicity.

During her Warner Bros tenure, she worked to promote Dunkirk, The Lego Movie, the Dark Knight trilogy and the Harry Potter franchise, among many others.

“The opportunity was there to come home and build on the commercial and critical success that I saw,” she says. “I am really pleased to have taken the role, despite the fact that it has been challenging.”

One Screen Ireland-backed project, Normal People, thrived amid an early lockdown spike in interest in television and streaming. Among the first TV dramas to receive funding from the agency, it also highlighted just how global an industry this is – no Irish broadcaster was involved in its making.

The crisis has had one broad upside. “The pandemic has really highlighted the value of arts and culture and how they can help contribute to our resilience,” she says, later describing cinema as “one of the most accessible and impactful of the art forms”.

Indeed, while Irish features such as Sea Fever and Vivarium have found an on-demand home, it is hard to gloss over the bad luck of their scuppered cinema release dates. The slimmed-down autumn schedule of virtual festivals isn’t ideal for distribution prospects either, though Finnegan says Screen Ireland is “trying to find creative ways” to publicise upcoming films.

She isn’t tempted to buy into the doomy narrative that the big screen’s hold on audiences is inexorably waning as heavily resourced streamers gain clout. “I feel very optimistic about cinema’s future,” she says. The collective experience of being in a cinema, darkened for the right reasons, is too powerful to abandon permanently, and she is looking forward to her own return.