Streaming company does not expect stellar sign-up rate to last 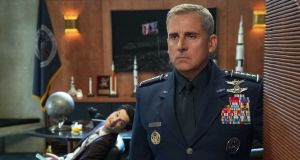 Space Force, starring Steve Carell, has been watched by 40 million households, according to Netflix.

Netflix added 10.1 million subscribers in the second quarter as the coronavirus pandemic continued to prompt a faster pace of sign-ups compared to the previous year.

But the streaming giant, which now has 193 million subscribers worldwide, warned shareholders that growth will be lower in the second half of 2020, saying the Covid-19 effect was already waning.

The company has added 26 million subscribers so far this year, which is almost as many as the 28 million it attracted throughout all of 2019, but it reiterated to shareholders that this was a “pull-forward” of underlying adoption rates due to global social restrictions.

“As a result, we expect less growth for the second half of 2020 compared to the prior year,” it said, adding that growth was starting to slow “as consumers get through the initial shock of Covid and social restrictions”.

In its second-quarter figures, Netflix beat analysts’ expectations on revenue, which is up 25 per cent year-on-year, but disappointed on earnings-per-share. This, combined with the outlook for subscriber growth, shares down as much as 15 per cent in after-hours trading.

The company said it was “slowly resuming productions in many parts of the world” and were “furthest along” in the Asia-Pacific region, having never fully shut down in South Korea. It has also returned to production in Germany, France, Spain, Poland, Italy and the UK.

“While we recently resumed production on two films in California and two stop-motion animation projects in Oregon and expect some more of our US productions to get going this quarter, current infection trends create more uncertainty for our productions in the US.”

Other parts of the world, such as India and parts of Latin America, are “also more challenging”, but given its long content production lead times, its 2020 plans for launching original shows and films “continue to be largely intact”. In 2021, the content slate will be weighted to the second half of the year.

Among its content successes in the second quarter, it highlighted two English-language scripted series: Never Have I Ever, a coming-of-age comedy drama by Mindy Kaling, and Steve Carell comedy vehicle Space Force, with both shows watched by 40 million households, according to Netflix figures.

It also noted the “buzz” generated by “local language” originals such as Money Heist (La Casa de Papel) in Spain, which was watched by 65 million households in its first 28 days, as well as Dark in Germany, Control Z in Mexico, Extracurricular in Korea, The Woods in Poland, Blood & Water in South Africa.

Netflix also said it would stop billing the “very small percentage” of subscribers who have not watched any of its content for the last two years.

1 Google tells workers to return to country where they are employed
2 Sean Quinn stunned at rebranding of Quinn Industrial Holdings
3 Probate is changing: What does that mean for you?
4 Whistleblower warned EY of Wirecard fraud four years before collapse
5 Will tracker mortgage be at risk if Ulster Bank closes?
6 Three Ireland switches on 5G network around the country
7 Seán Quinn on rebrand, Irish golf tourism wipeout, and probate changes
8 Landlords accuse New Look fashion group of exaggerating insolvency
9 Google ups bid to clinch approval for $2.1bn Fitbit takeover
10 Dublin Aerospace takes over Flybe’s aircraft servicing base in Exeter
Real news has value SUBSCRIBE