FC Barcelona to pursue Nike for compensation over defective shirts 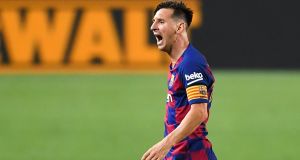 Lionel Messi in FC Barcelona colours. The club has withdrawn the defective jerseys before they could go on sale to fans. Photograph: Getty

FC Barcelona is set to pursue Nike for compensation after discovering a defect with new football kits made by the US sportswear maker, resulting in the Spanish club missing out on a crucial shop window at the end of the football season.

Fixtures in Spain’s La Liga, postponed during the pandemic, restarted last month with Barcelona officials hoping its players such as Lionel Messi and Antoine Griezmann would return to action wearing the latest design of the club’s red-and-blue shirt.

But the club withdrew home jerseys, intended to be worn by fans rather than players, before they could go on sale after discovering a manufacturing error resulted in the colours bleeding when wet, said people familiar with the issue.

One person with knowledge of the situation said the club was preparing to request €15 million-€20 million to take account of lost sales.

However, another person briefed on the talks said it was too early to say how much the club would demand. The defect has yet to be fixed so it remains unclear when the shirts can go on sale.

The hope is for the problem to be solved by the time the final stages of the Champions League, Europe’s top club tournament, resumes in August. The tournament is seen as crucial in advertising the new shirts to millions of supporters worldwide.

Kit agreementThe issue is particularly costly for Barcelona compared with other top teams across the continent. In 2018, the club began a 10-year kit agreement with Nike worth

€150 million-€155 million annually, one of the biggest kit supply deals in the sport.

In the same year, the club formed Barça Licensing and Merchandising, in effect taking control over areas such as its retail stores and shirt sales worldwide. Most other football clubs rely on outside parties to handle retail operations.

These moves helped the club earn €840.8 million over the 2018-19 season, roughly €150 million more than the same period a year earlier, an increase that has made Barcelona the highest-earning football club in the world.

Nike said: “We have identified an aesthetic change that is required in the FCB 2020-21 fan home jersey. Once this is resolved, a date for the availability of this jersey will be announced.”

It is unclear if the problem affects Nike’s deals with other top teams. In recent weeks, Italy’s Inter Milan and England’s Chelsea, which also have contracts with Nike, have shown off newly designed shirts with no apparent manufacturing issues.

Product defects are not unusual in professional sports.

In 2017, during the first weeks of Nike’s current contract to provide outfits for the National Basketball Association, several top players, including LeBron James, found that their kits tore in half during routine contact.

Runner Eliud Kipchoge missed out on a world record at the 2015 Berlin Marathon when the insoles of his Nike shoes came unstuck. Basketball shoes from Nike and Adidas have been known to burst on court.

Nike, for its part, is in the midst of drastic changes as the world’s largest shoe and clothing maker reels from pandemic-imposed losses. Widespread global store closures during the height of the coronavirus outbreak forced the company to adjust its inventory orders through the rest of the year, executives said on a call with analysts last month.

Chief executive John Donahoe, who took the reins in January, told employees two weeks ago there would be rolling lay-offs through the autumn as Nike accelerated restructuring, said people briefed on the matter.

The company is expected to realign how it designs, creates and sells products, dividing segments by men, women and children, instead of individual sport categories such as football or running, these people said. – Copyright The Financial Times Limited 2020