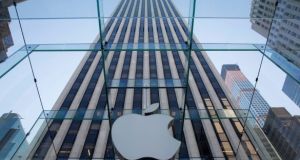 The €14.3 billion deposited by Apple in 2018 could remain locked up in loss-making investments for another three years if the European commission appeals last week’s decision

Two US public service pension funds are seeking a class action against Perrigo, claiming it harmed investors by allegedly failing to disclose its liability on a €1.6 billion tax assessment from the Revenue Commissioners.

The conflict stems from Revenue’s audit of Elan’s sale of a 50 per cent stake in Tysabri to Biogen in early 2013, according to the Sunday Independent. The investors allege Perrigo didn’t reveal the extent of its liability until an SEC filing in late 2018, leading the pharma company’s share price to fall by 30 per cent in one day.

The same paper says hotels are expected to be down about €200 million in revenues between now and September due to cancellations or postponements of weddings. It quotes Aiden Murphy, a corporate recovery partner at Crowe, who estimates that up to 60 hotels are in danger as they rely on weddings for at least half their turnover.

Enterprise Ireland has only allocated €20 million of a special Covid-19 rescue fund to Irish companies so far but the entire €180 million Sustaining Enterprise Fund should be allocated before the end of the year, according to chief executive Julie Sinnamon.

Some €80 million worth of merger and acquisition activity was paused earlier this year due to Covid-19, The Sunday Independent reports. Grant Thornton Ireland, which expects to close M&A deals worth approximately €100 million by the end of the year, said a large number of transactions have since started again.

Profit warnings from more than half of Irish listed companies’ have failed to provide enough information for investors to assess how businesses will be impacted by Covid-19, according to the Sunday Times Ireland edition. A study from UCD, which covers among others, CRH, Flutter and Grafton, found that some companies were coy when it came to reporting how they expect the crisis will affect them.

Up to 100 pensioners could lose their savings after loaning €3.6 million to an unregulated investment scheme backed by former taoiseach John Bruton, the same paper reports. Europa Strategic Partners, which has ceased trading, promised high returns on a four-year loan that are now valued at zero. The company’s owner, Stuart Baillie, has personally guaranteed the investors’ money.

Tech giant Apple has lost €56 million of funds held in escrow related to the state aid case that was annulled last week due to negative interest rates. The Sunday Times adds that the €14.3 billion deposited by Apple in 2018 could remain locked up in loss-making investments for another three years if the commission appeals the decision by the European Court of Justice.

The Low Pay Commission has deferred a decision on raising the minimum wage from €10.10, the Business Post reports. The commission’s members were unable to reach a decision on what advice to give the Government due to the pressure on businesses arising from Covid-19.

The newspaper says Tánaiste Leo Varadkar has held discussions with Irish banks over possible options for mortgage customers who cannot afford to resume repayments one payment breaks end in mid-September. More than 70,000 households have availed of the break since Covid-19 hit. Controversy has erupted over the banks’ decision to continue charging interest during the crisis.

Lastly, the same newspaper says Lidl has taken on additional staff to cope with health and safety requirements linked to the Covid crisis. It originally announced plans to hire 400 workers but has since said it needs an additional 300 people.