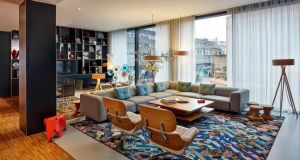 CitizenM’s hotel in Glasgow: the company is planning to build its first Irish property in central Dublin, near St Patrick’s Cathedral.

People are likely to be discouraged from flying abroad for the rest of the summer as the Government delays the lifting of foreign travel restrictions, according to the Sunday Independent.

It said expectations that Ministers would this week publish a list of countries to which it is safe to travel were scotched last Friday amid growing anxiety in Government over the impact such a move would have on the spread of Covid-19 in Ireland.

People are now likely to continue to be advised to avoid all non-essential travel abroad and to self-isolate for 14 days after arriving in Ireland until at least July 20th.

A further decision will be taken at that point based on the latest public health advice.

Boutique hotel chain CitizenM is planning to build its first Irish property in central Dublin, according to a report in the Sunday Times.

A company connected to the Dutch chain has applied for permission to construct a 247-room hotel on Bride Street, Dublin 8, near St Patrick’s Cathedral, it said.

The building will measure up to nine storeys in height. Its facilities will include a living room-style foyer with a bar, check-in pods, meeting rooms and a landscaped terrace courtyard.

The plans also include an open-air art gallery at ground-floor level, and another gallery, known as the Stephenson Room, on the second floor. The building will also feature an “artwork poem” displayed on the brickwork of the third, fourth and fifth floors.

CRH, an Irish building materials group, has been found to have the largest pay differential between chief executive and a median earner among FTSE-100 companies which used UK government Covid-19 support, the Sunday Independent reports.

The finding was included in research by the UK’s High Pay Centre, an independent non-party think-tank established to monitor pay at the top of the income distribution.

The report analysed the pay ratio disclosures made by 107 UK companies. It found the average chief executive of a UK company was paid 55 times more than the company’s median earner.

Losses on the €14 billion Apple escrow account have more than doubled, as the fund struggles to generate returns on its low-risk investments, the Sunday Business Post reports.

The escrow account, set up to manage the back tax that the iPhone maker may owe the State, also had an outflow of almost €210 million to allow the company to meet a tax liability in another country.

According to filings last week by the National Treasury Management Agency, which oversees some of the activities of the escrow account, it notched up a loss of €40 million in 2019, up from €16 million in 2018. The cost of managing the fund was €7 million during the year, an increase on the €2 million from when it was established in May 2018 to the end of 2018.

Businesses could have the wages of newly hired workers subsidised by the State, under soon-to-be-announced Government plans aimed at stimulating an economic recovery, according to a report in the Sunday Business Post.

The coalition is keen to reduce the number of people on the €350-a-week pandemic unemployment payment as the economy reopens. It has already flagged that it intends to extend the temporary wage support scheme beyond the expiry date of August 30th, but it is now also planning to have it apply to new workers, the report said.

The aim is to persuade existing and recently formed businesses to hire some of the 439,000 people on the pandemic unemployment payment.