Where is the creative, effective advertising for face masks? 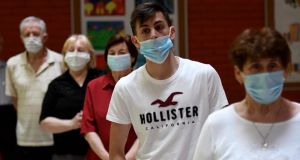 Since June 29th, when many restrictions were lifted, a visible gap has emerged between the official stance on face masks – wear one if you think it’s right – and business-enforced practice – you have to wear one. Photograph: Denis Lovrovic/AFP via Getty Images

The most recent coronavirus information radio ad is a calm piece of communication. “The virus hasn’t changed” the soothing female voiceover says, asking that “we all act responsibly”, and “be sensible”.

Also packed into the 30 seconds is a run-through of all the measures to halt the spread of coronavirus, from washing hands to social distancing, even advice to business owners.

As with all relentlessly wordy radio ads, it quickly becomes aural wallpaper. And sandwiched between news reports of second surges in other countries and details of crowded pubs at home it seems a bit too calm, vague even.

And that would have been fine months ago when coronavirus public service announcements (PSA) didn’t have to work too hard beyond giving basic facts on health policy. The daily press conferences broadcast from the Department of Health did the heavy lifting in slamming the reality of coronavirus in our faces and putting us all on alert.

The coronavirus information campaign – with its distinctive yellow livery devised by Zinc Design – is the work of two Government departments, Health and the Taoiseach, and the Health Service Executive, all working together on the messaging.

In the early days of the pandemic, the Department of Health’s “In This Together” campaign created by TBWA, with media buyers PhD, was particularly effective in catching the mood.

Since the pandemic began, the HSE has run seven TV and 10 radio campaigns, as well as advertising for print, out of home, digital and social media. According to the agency, the March to June media spend was about €1.9 million. In addition, it says it has received “media value donated from brands and fellow public services with an estimated value of another €1.3 million” – presumably, though it’s not clear, this is mostly media budgets from other Government agencies that couldn’t advertise during the lockdown as their services were unavailable.

Active listeners to that radio ad will have stopped at the mention of mysterious “face coverings” to wonder if she means face masks, like those referred to in the Government’s current, equally low key, animated TV ad.

What PSAs never want to do is confuse and, worse, become adrift from the reality on the ground – how consumers actually behave, whatever the letter of the law – or they risk losing authority.

Since June 29th, when many restrictions were lifted, a visible gap has emerged between the official stance on face masks – wear one if you think it’s right – and business-enforced practice – you have to wear one (from airlines to hairdressers, and opticians to specialist shops).

Anecdotal reports suggest an uptick in supermarket shoppers wearing them. Public transport operators have asked passengers to wear masks – regulations to make them mandatory are expected this week.

You don’t have to be a medic to grasp that asymptomatic people can infect others and so, in a viral pandemic, keeping your spit to yourself is a good idea – an easy sell for any advertising agency that makes creative, targeted and habit-changing advertising campaigns.

A mask campaign – quite different from the vague PSAs we’re seeing and hearing now – would help ease the confusion, reassure people already wearing masks, prompt others to try and pave the way for more directional ads when masks become mandatory on buses, and in public spaces (if we are to follow large swathes of the globe). It would also help businesses who ask – but can’t demand – that their customers wear them.

There are lessons in this pandemic from the Aids/HIV epidemic of the 1980s – could face masks be this health emergency’s condoms?

In the early 1980s, Aids prevention information in the US took the form of basic public service messages, wordy abstinence-promoting bulletins that were largely ignored.

By 1987, it was clear the messaging was not working – people persisted in having sex – and there was panic as the US death toll from the disease in that year reached 48,000. There was a considerable problem, though – condoms, known to halt the spread of the virus, could not be advertised having long been banned by all TV networks, magazines and newspapers on moral grounds. And then, they simply weren’t: media bans lifted – not without controversy and pushback – but such was the urgency of the terrifying health crisis that “safe sex” advertising campaigns for condoms began appearing everywhere.

It was a landmark event in the history of advertising. Campaigns approached condoms like any lifestyle product, dealt with issues of not “liking them” or “finding them uncomfortable” and in the first year of widespread condom advertising, sales in the US (condoms sales were illegal in Ireland at the time) rose by 40 per cent.

A health measure that’s scientifically acknowledged to work doesn’t have to be a legal obligation to be clearly explained, because if the benefits are widely understood, adoption typically follows. Advertising can do that.

Last week on a busy morning Luas, a man in a face mask – worn not to protect himself but others – asked a bare-faced woman, why she wasn’t wearing a mask on public transport; he thought they were mandatory. “I’m doing my make-up,” she replied with an eyeroll – and she was. Such interactions will still happen when masks do become mandatory on public transport – who’s going to police it? But she might have thought differently if through a powerful campaign on the matter, she understood where he was coming from.