May 19th, 2016: Minister for Justice Frances Fitzgerald addresses the Dáil in relation to the ongoing fallout surrounding Garda Commissioner Noirin O’Sullivan and the O’Higgins report into alleged Garda malpractice. 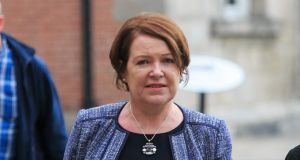 The former Garda commissioner, Nóirín O’Sullivan, has sought all information held on her by a number of major media organisations under European Union data protection rules.

Faced with the request, RTÉ has told some of its journalists that all of their email records are being examined by the State broadcaster’s data protection officer.

However, the National Union of Journalists has expressed concern about RTÉ’s action, saying that they were “concerned by the broad sweep” of the request from the former commissioner.

In addition, the NUJ’s Irish secretary, Séamus Dooley, said he believed RTÉ journalists’ emails should not be examined by the station’s data protection officer. An initial review should be carried out by senior editors.

The former commissioner has also made the same request for data records to The Irish Times and the publisher of the Irish Mail and the Irish Mail on Sunday.

The requests come against a background where she has lodged defamation proceedings against the Irish Examiner and the publisher of the Irish editions of the Times and Sunday Times.

It is understood The Irish Times and the publishers of the Mail titles told Ms O’Sullivan in August that any information processed about her for journalistic purposes is exempt from the provisions of the General Data Protection Regulation (GDPR).

While RTÉ may in time give her a similar response, it has decided that it must first collect the relevant data held on its IT system and then decide what elements of it are covered by the journalism exemption.

In a recent message to a number of journalists, the broadcaster’s data protection officer, Judith Fanning, has said that as a result of Ms O’Sullivan’s request, “RTÉ is now obliged to request that IT conduct the necessary search of your RTÉ email account for any records that exist relating to Nóirín O’Sullivan and we wish to let you know that this will be taking place. Please note that you do not have to do anything.”

As the search to be conducted includes all documents in electronic and hard copy form, “we need to ask you if you hold any records” on certain RTÉ platforms “or in hard copy form”, the message said.

The reason for Ms O’Sullivan’s data request to RTÉ, The Irish Times and the publishers of the Irish editions of the Mail, is not known.

The commissioner has recently taken defamation actions against the Irish Examiner and the publisher of the Irish edition of the Sunday Times. Those cases are understood to be linked to the coverage of matters concerning Ms O’Sullivan and Sgt Maurice McCabe.

The Charleton tribunal, which investigated matters linked to the McCabe affairs, is expected to publish its report next month.

The GDPR permits people to access information about them held by an organisation on computer or in a structured filing system.

However, the right of access is subject to a number of exemptions, including where the information has been given in confidence and the recipient has a legitimate interest in receiving the information. Journalists also have a separate, general right to protect the confidentiality of sources.

A spokeswoman for RTÉ said all data access requests under GDPR “are directed to RTÉ’s data protection officer who reviews them against [RTÉ] procedure including circumstances where the journalism exemption may apply.”

1 We are ‘sale agreed’, but can we go back with a lower offer?
2 Working from home: New costs, new stresses and little relief
3 HSBC board rethinks overhaul and seeks even deeper cuts
4 Joint accounts: if one of us dies, can the other access the money?
5 Eason to lay off 150 staff as it prepares for June reopening
6 Eason’s job cuts, ESB shelves Poolbeg generator, and Pubs v FBD in court
7 Covid-19 has turned the volume up on musicians’ cut from streaming
8 ESB shelves plan for €500m electricity generator at Poolbeg
9 ‘Over 1,000’ pubs have interest in Covid-19 insurance test case
10 EU parliament may block fund unless it has grants which do not need to be repaid
Real news has value SUBSCRIBE

Oil rises on predictions that market may rebalance in June 07:03
Eason’s job cuts, ESB shelves Poolbeg generator, and Pubs v FBD in court 06:30
We are ‘sale agreed’, but can we go back with a lower offer? 05:45
Stocktake: Active fund managers fail to earn their keep 05:40
Working from home: New costs, new stresses and little relief 05:32
Search executive
jobs on irishtimes.com