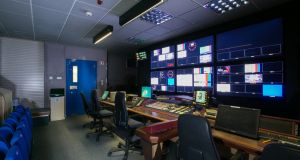 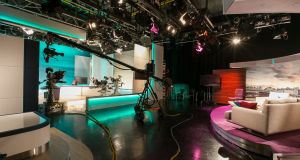 UTV’s Studio One at Havelock House. The channel, now owned by ITV plc, has moved out of its historic home to new premises in the Belfast Harbour Estate.

It was once a hemstitching warehouse, and later a wartime billet for American soldiers stationed in the North. But Belfast’s Havelock House, a labyrinthine building on the city’s Ormeau Road, is best known for being the pink-hued home to Ulster Television, aka UTV, from 1959 until earlier this year.

Yesterday it was confirmed by property agents Savills that the building has been sold to London-based Olympian Homes, which plans to redevelop it and turn it into flats (located enviably close to the city centre). UTV, which was acquired by ITV plc in 2015, has already moved out and is these days “well settled”, it says, in a new studio and production facility in the Belfast Harbour Estate.

True, there was something rather moribund about the place in its final years, with its second studio falling into disuse as a result of programming cuts inflicted during the recession. There was little sign of the capital investment for necessary technical upgrades, while the year before the sale of UTV Media’s television assets to ITV was a dismal period of profit warnings triggered by its over-confident foray into the Republic with the UTV Ireland channel.

But the sale of Havelock House still marks the final act in a protracted end to a piece of 20th century broadcasting history.

When actor Laurence Olivier went on air in the closing months of the 1950s and declared it to be his “unique privilege” to be “the first person to appear before you on Ulster Television” – in black-and-white, of course – he did so from Havelock House. Pre-dating RTÉ, this was the first television channel to be broadcast from Ireland.

“Generally speaking, facilities will be inferior to the BBC,” The Irish Times reported days before the launch in October 1959, “but, looking at the personalities involved, the creative spark may well burn a little brighter”.

Later, the building became busier for a reason unconnected with UTV’s own fortunes: it was often used by international television crews to process and edit their film footage of the Troubles.